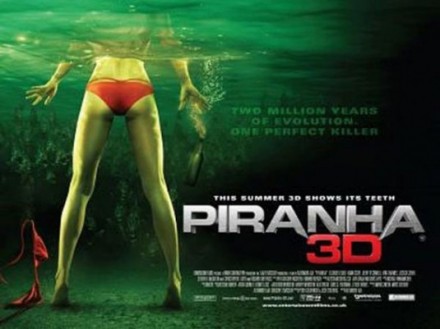 Rotten Tomatoes, a website which aggregates movie reviews from as many sources as possible to give a comprehensive rating, shows a current rating for the Lake Havasu-based Piranha 3D at 81%. The movie, which debuted at the box office Friday, was not expected to do well with critics, but – in its category – most of them had time for it:

“Those who go in craving blood, gore, breasts, and Ving Rhames going medieval on a school of prehistoric, flesh-eating piranha are going to leave the theater with big, silly grins on their faces.” – Screen It!

“Piranha 3D is nothing less than the Avatar of B movie schlockfests.” – Hollywood.com

“Crams more blood and body parts (attached and otherwise) into a 90-minute time frame than any other movie in history.” – eFilmCritic

“Has a bit of build up but once the carnage finally hits, it’s 20 – 30 minutes of absolute, beautiful, mayhem.” – Eclipse magazine

“Gushers of blood, ripped flesh by the kilo, and acres of bare booty and boobs (some of them real).” – MTV

My own take on it is that it’s insane, and extremely funny for those who can handle gratuitous violence with a wink and a nod.

I saw Piranha with a sold-out crowd at the 10pm showing in Lake Havasu City on Friday night. The theater was bubbling from the beginning with reactions from the local audience who recognized just about every location in the film and lots of references to the culture here. A couple of local businesses get exposure: Kokomos was mentioned by one character, and a few shop-front signs are visible on McCullough (I wonder if they paid for it).

A local Havasu boy is derogatorily called a ‘sand rat’ by Jerry O’Connell, which got some laughs from the audience, giving the impression that most thought the moniker a tad ridiculous. Will ‘sand rat’ now be added to ‘desert rat’ and ‘river rat’ in the river lexicon? The city is called “podunk” at one point, though that’s not the impression the movie leaves, with its scenes of hard-partying crowds and lots of references to the influx of college kids during spring break.

It’s got to be said, for those who worry about the portrayal of law enforcement, there couldn’t have been a better depiction by Elizabeth Shue. She was the competent, brave and likable Sheriff who patrolled the water during party-time and never gave the impression of being anything but in full control (except, of course, when the Channel was invaded by man-eating fish).

I’ve said it before and I’ll reiterate; this is not one for the kids. It’s probably the goriest film in a decade or more, but it’s got a sense of humor for the sake of which tongue is placed firmly in cheek as director Alexandre Aja decides how to methodically kill off his characters one at a time. He’s having fun making his movie, and he wants you to know. Much is made of the boobs in the film, and they’re certainly there in all their glory.

It’s interesting the degree to which the river is portrayed as a hedonistic party zone. In real life, that is best exemplified by the MTV specials from Lake Havasu in the 1990s, and perhaps the wet T-shirt contests for which places like Roadrunner are famous. But the general image of the river projected in the film, aside from the message that you may be eaten alive, is one which I think reinforces a young crowd’s desire to find a safe place to have a ton of fun where the rule of law still applies.

After all, everyone knows the piranha aren’t real, right?