A few weeks ago, I was sitting on my deck one weeknight and happened to observe in the eastern sky a bright light, appearing suddenly as if switched on. As it ‘switched off’ again, another one, further south, lit up, and then a third, fourth and fifth. We watched them for a few minutes before they went out, and then several minutes later the whole sequence happened again in another part of the sky. 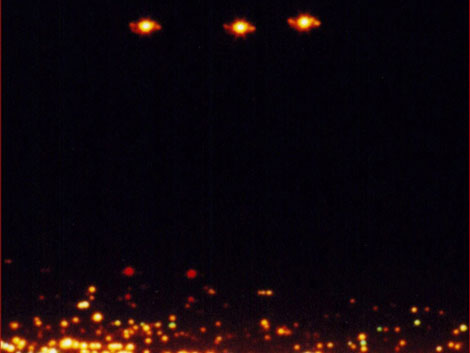 Last night, Parker residents saw this same phenomenon, some remarking that it happens “all the time”, or at least isn’t entirely uncommon. In 1997, a phenomenon in Phoenix which came to be called the Phoenix Lights caused a stir, some residents describing the lights in a similar way, others perhaps embellishing on the shape and adding extra details such as seeing a triangular-shaped craft. They happened again in metro Phoenix ten years later, captured on video clips like THIS one.

The military explanation is that they’re flares on chutes, released by plane. Because of their light weight, they fall so slowly that they can appear to be motionless to bystanders miles away. According to globalsecurity.org:

Air-deployed LUU-2 high-intensity illumination flare are used to illuminate targets. The LUU-2B Flare has a light output rating of 1.8 x 10(6) candlepower and at 1,000 feet altitude illuminates a circle on the ground of 500 meters at 5 lux. The LUU-2 is housed in a pod or canister and is deployed by ejection. The mechanism has a timer on it that deploys the parachute and ignites the flare candle. The flare candle burns magnesium which burns at high temperature…

More info here. Various military training exercises are regularly conducted in western Arizona and eastern California airspace, on exercises from Luke Air Force Base, Yuma Marine Air Base, Barry Goldwater Gunnery Range and others. This would explain the prevalence of this here activity in these here skies.

Have you seen these lights at night? Do you buy the military explanation? If not, what are they?