Up to 300 people crowd into Goatman premiere

Hemet Productions’ premiere screening of ‘Goatman: Search for the Legend’ on Friday night was many times more popular than anticipated. Estimates ranged from 250 to 300 people who showed up to watch the short documentary film on the local legend, most of them standing or sitting on the floor for the duration, which included an introduction by the group at the beginning.

Demand for copies of the film on DVD was high too. Around 20 DVDs had been brought to the screening and were all taken within a few minutes of the credits rolling, leaving the rest to take an order form. 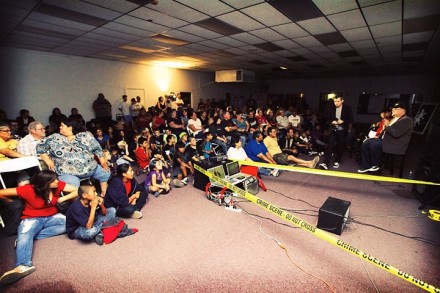 Reviews of the film were very positive afterwards, flooding Facebook with comments: “It was wayyyy cool!” “It was great, we loved it!” “It was awesome!”  Perhaps the comment which summed up the response of most was this one: “I enjoyed this very much. I can’t say that I believe in Goatman any more or any less than before, though.”