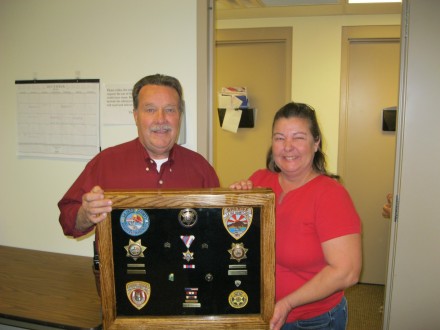 On Friday, December 10, 2010, fellow Deputies and employes of the La Paz County Sheriff’s Office hosted a Retirement Luncheon for Sgt. Karen Slaughter. Sgt. Slaughter started as a Dispatch/Jailer in early 1989 and became a Certified Peace Officer later that year. With 21 years of sevice, Sgt Slaughter was presented a Showdow Box by Sheriff Don Lowery containing memorabilia of her service with the Sheriff’s Office. Everyone wished her well on her new career as Justice of the Peace for JP5 in Salome.