The La Paz Economic Development Corporation has completed a grant funded process that created a new brand for the organization and for La Paz County’s economic development and marketing efforts. Additionally this process produced a Marketing Needs and Plan document for use by both organizations.

Market research in the form of a perception survey was conducted by The Spalding Group encompassing current businesses in La Paz County and those businesses that considered locating in La Paz County but went elsewhere. This research provided the foundation for determining strengths, weaknesses, opportunities and insights about the La Paz area. “The resulting “Marketing Needs and Plan” will provide a roadmap for becoming more competitive in our the business attraction efforts” said D.L. Wilson, La Paz EDC President & CEO. 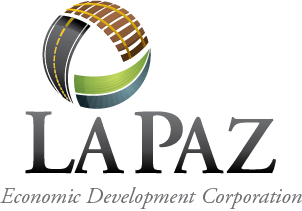 Wilson further stated that “A contemporary, professional logo consistently used is essential to creating a memorable brand for the La Paz area. We now have that tool. The logo itself depicts the key elements of infrastructure available in our area (rail and highways) as well as the water and agriculture that are vital components of our economy. The tagline of “The Western Gateway” was chosen to depict our central location to serve the markets in Arizona, California and Nevada.”

“This Project was funded by a Contract under a Governor’s Office of Economic Recovery Grant to La Paz County and the La Paz Economic Development Corporation from the American Recovery and Reinvestment Act through the U.S. Department of Education and the Arizona Commerce Authority, and funding is not an endorsement of any products, opinions, or services. All USDoE, ACA, La Paz County and La Paz Economic Development Corporation funded programs are extended to the public on a non-discriminatory basis. The primary mission of the ARRA funds is to assist, coordinate, and collaborate with eligible local government entities in applying for the established allocation and implementing projects focused on the Governor’s Jobs Agenda – Rural Economic Development Program.”