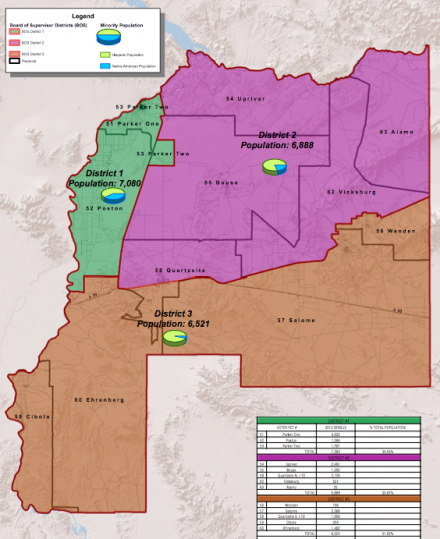 As the state of Arizona’s redistricting process grinds to a halt due to massive disagreements over the commission’s proposals, the La Paz County Board of Supervisors have submitted their own proposals for public comment.

The map above represents the proposed districts, each with an elected Supervisor representing them. Every 10 years the Board of Supervisors must use the latest census to redraw the maps with a strict set of criteria, including population.

On Monday, the Board held a public input meeting in Parker, and yesterday a further meeting was held in Salome. The last will be held on Monday (November 14th) at 1pm at Quartzsite Senior Center.

On November 21st the Board will meet to make a decision on whether to adopt the new districts.

To see the map in detail, it can be downloaded by clicking HERE (large file).