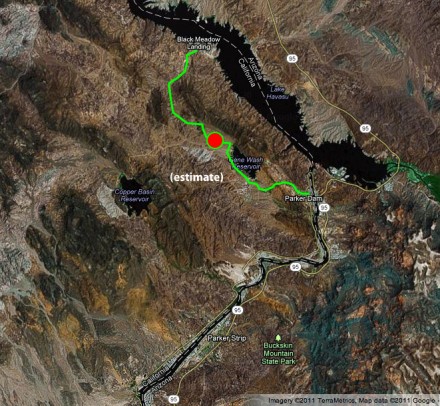 A Parker Live reader says they discovered T Watts’ light blue pickup truck and have been talking to law enforcement about it, a mere 3 hours after it was posted on this site.

The man was on the road to Black Meadow Landing (approximated above) when he spotted the truck around halfway there. He said it looked like it had been rolled. “It was totaled,” he said. He spoke to California Highway Patrol about it, who had it on a wrecker.

Parker Live also has been told that law enforcement may have been given a lead on the perpetrators, independently of the above source.

Thank you all for your help and for sharing this story.