9:50am– A head-on collision 2.28 miles north of Bill Williams Bridge is impacting traffic between Parker and Lake Havasu City. The crash is reportedly between a truck and motorhome, and both northbound and southbound lanes of AZ 95 have been closed since 9:28am.

10:43am– La Paz County Sheriff’s Department urges travelers to take an alternate route, calling the accident “severe”. ADOT has changed its timescale from “11:30am” to “Until further notice.”

10:58am– The best alternate route from Parker to Havasu may be west on Highway 62 to Vidal Junction, then north on U.S. 95 to Needles, CA and then east on I-40 to AZ 95, and south to Lake Havasu City. (Estimated time 2 hours. Compare with 50 mins once the road opens.)

11:21am– Traffic is being allowed through one lane at a time, alternating northbound and southbound.

12:22am– Eyewitnesses report the vehicles involved are a minivan and truck towing a boat, not a motorhome as previously reported. Traffic is now flowing. 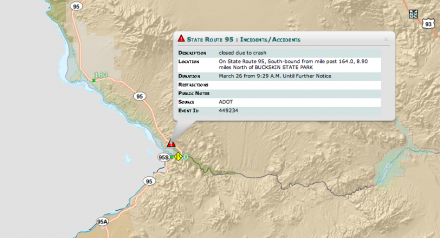 This incident is similar to one a week ago, on the same stretch of highway.