A study by the University of Washington’s Institute for Health Metrics and Evaluation says that, despite 20 years of improvements in health care and rising life expectancy elsewhere, males born in La Paz County in 2009 have a shorter average life expectancy than those born in 1989.

In 1989, La Paz County had the best life expectancy in any surrounding county in the southwestern United States (see graphic above; click to enlarge). But, while lifespans have improved in every other Arizona county over the past two decades, La Paz has failed to show any improvement.

Males born in La Paz County in 2009 can expect to live 1.5 fewer years than those born in 1989. The lifespan for La Paz County women improved by nearly a year in that time (which compares to a 5-years improvement in Maricopa County and a massive 9.5 year improvement in Yuma County). 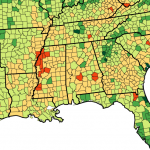 Despite La Paz County’s failure to improve in the past 20 years, it could be worse: hundreds of counties – many of them in the South – showed serious declines in life expectancy in the same period. This trend is seen by some experts as a sign that diets in those places are getting worse, leading to obesity and other illnesses such as diabetes.