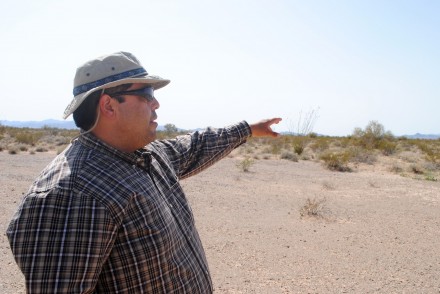 The Quechen Tribes are opposing the Quartzsite Solar Energy Project on La Posa Plain, according to this article from Cronkite News, making it one of many projects that various tribes (including CRIT) are taking issue with.

Like all environmental impact statements, the document for the Quartzite project includes reports of cultural resources found by archaeologists. These resources include anything associated with history or prehistory, from artifacts indicating significant historical events to sacred or religious sites.

As a result of consultation with tribes, the environmental impact statement expanded the distance for consideration of potential harm to views from three miles to 25.

Of the 18 notable viewsheds [open areas between mountains] surrounding the project, tribes are listed as sensitive viewers for seven of them, including the view from the Bouse Fisherman Intaglio.

The final environmental impact statement on the Quartzsite project is expected to be released this summer, with a decision to follow in short order.