CORRECTION: The original version of this story stated, per the Desert Messenger article passed along to us by Police Chief Gilbert, that the charges involved “felonies” including “aggravated assault on a peace officer”. Michael Roth says this is incorrect and his charges are Disorderly Conduct and Criminal Trespass, both of them misdemeanors. According to a QPD Press Release, there were felonies among the original charges, though it is not known whether the County Attorney will prosecute them. 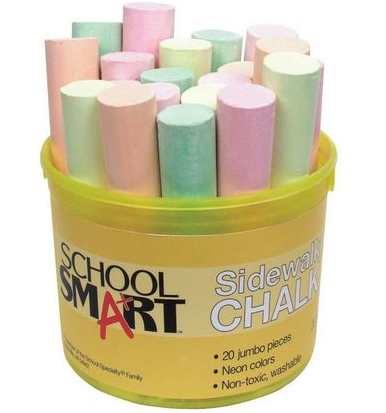 Michael Roth, a Quartzsite resident and local activist, was found guilty of Criminal Trespass and Criminal Damage for taking part in the national ‘Chalk The Police Day’ protests.

On September 26th, 2011, Roth and Dana Stadler used sidewalk chalk to leave protest messages on the Town Hall steps and other surfaces. Video from surveillance cameras led to the arrests of Roth and Stadler. They both reportedly refused plea bargains and were convicted under a portion of Arizona law that addresses graffiti. Judge Lawrence King sentenced both to 120 days of probation.

Then, on Friday, Roth and Stadler were both arrested again at the Quartzsite Police Department, with multiple charges.

Roth commented, “The charges were ridiculous to begin with. But that’s not surprising. Everything the government in Quartzsite does is doubly ridiculous! While the rest of the nation was able to peacefully, non-violently protest the criminal activities of their police departments with children’s chalk on National Chalk The Police Day, Quartzsite Chief of Police Jeff Gilbert and Town Manager Alex Taft used the opportunity to abuse their authority, harassing anyone who questions their policies and tactics. What are they so afraid of?”

Roth and Stadler were released by the judge on their own recognizance.

Quartzsite Police Chief Jeff Gilbert contacted Parker Live to point out some statements reportedly made by Roth in the Desert Messenger after his conviction. Roth is quoted as saying, “If Jeff Gilbert keeps these policies up, something is going to happen to his officers, ‘cause somebody, less calm than me, less calm than Stadler, is going to do what’s already happened to a cop in this town. They’re going to mess with the wrong person and that blood will be on Jeff Gilbert’s hands.”