CORRECTION: An earlier version of this story had the return journey wrong; the Santa Fe 3751 will be back in Parker on Friday, rolling out early Saturday. 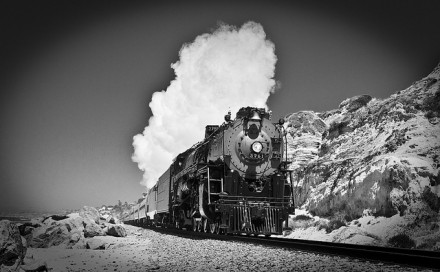 On Monday, the steam locomotive known as the Santa Fe 3751 will make the first of two overnight stops in Parker on the way between Los Angeles and the Grand Canyon.

The excursion, operated by The Central Coast Railway Club under contract with Amtrak, BNSF and the Arizona & California Railroad, will take 6 days in total and comprise a night’s stay in Parker and a night in Williams.

The engine is a 4-8-4 “Northern”-type steam locomotive. The AT&SF once owned more than five-dozen such designs. The Santa Fe originally employed all of its Northerns for use in passenger service, where their blend of power and speed was suited just right on a railroad that stretched more than 2,200 miles between Chicago and Los Angeles, and whose main line was quite rugged west of Texas.

Santa Fe 3751 was spared the scrapper’s torch and donated to the city of San Bernardino where it remained on displays for many years before being restored back to operation by the San Bernardino Railroad Historical Society in the early 1990s. Today, the locomotive occasionally makes an appearance from its home in Los Angeles to pull excursions or help to educate the general public about railroads.

The excursion will be expected to arrive in Parker after 9 p.m. on Monday, May 14th (UPDATE: the railroad now expects arrival after 10 p.m.). Passengers will spend the night in area hotels/resorts, and Pullman passengers will stay aboard the train in their sleepers. The following morning (Tuesday, May 15th), the Santa Fe 3751 will leave Parker for Williams around 9:30 a.m. The return trip will stop for the night in Parker on Friday (May 18th) and leave early on Saturday, May 19th.

Tickets can be purchased in segments, so passengers can get on and off at any stop, including Parker. Passage from Parker to the Grand Canyon aboard the Santa Fe 3751 starts at around $475 (return). Info HERE.