Foster demands to be seated as mayor in 5 days 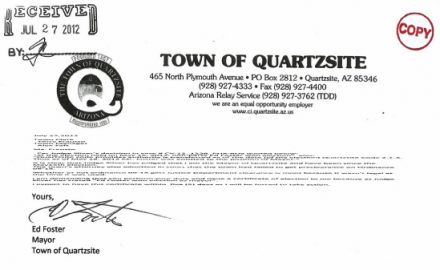 Foster – who was told he was “not qualified” by the incumbents on the Quartzsite Council including the Town’s former mayor who lost the election to Foster – is giving Frausto 5 days to issue him with a certificate of election and warning of “action” if it does not happen.

In the letter, Foster cites the ruling of a federal judge which seated Mark Orgeron as a council member Friday. Orgeron was also told he was “not qualified” by the council after May’s election. In the ruling, Judge Roslyn Silver says, “Quartzsite code provides authority is transferred as of the date [of the election] Quartzsite Code 2-1-3. Thus as of May 15th, 2012, Mr. Foster was entitled to the position of mayor.”

“It is clear that Judge Silver has judged that I am the mayor of Quartzsite and have been since the May 15th election … I am demanding that you perform your duty and issue a certificate of election to me because as Judge Silver has stated ‘Ed Foster won election as mayor.’ I expect to have this certificate within five (5) days or I will be forced to take action. Yours, Ed Foster, Mayor, Town of Quartzsite”

The letter can be seen HERE.

A second letter, addressed by Foster to the council members including Orgeron, urges the council to vote to seat him as soon as possible to save the Town money:

“It’s about time that the council stops the town staff from wasting the taxpayer’s funds. … If I have to go to court next week then the taxpayers of Quartzsite will suffer another judgment in the 10’s of thousands of dollars. I would suggest that you get together and call a special meeting like [former] Mayor Lizarraga tried and get this over with so the community can get on with its life.”