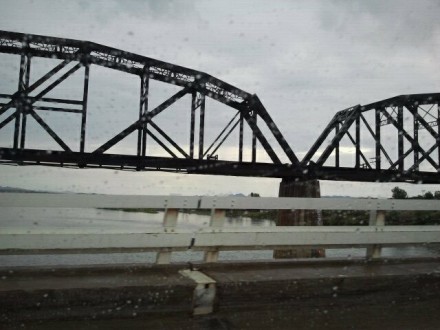 1:12pm– Power is out for residents along the Arizona side of the Parker Strip north of Parker. The La Paz County Sheriff’s Department reports that power lines are down along Highway 95 north of BlueWater Resort & Casino, and that the highway will be closed until further notice.

Areas south of Parker have seen rainfall, and washes are reported to be flowing near Quartzsite. Motorists are urged to approach running washes with great caution. The National Weather Service issued a Flash Flood Warning, the highest level of alertness for flooding, for the areas between Highway 95 and Highway 72 (until 1:30pm), saying, “SIGNIFICANT FLASH FLOODING IS A NEAR-CERTAINTY IN THOSE AREAS.”

UPDATE 1:22pm– BlueWater Cinemas says its lobby saw a small amount of flooding from the storm, which did not affect the Town of Parker beyond rain.

UPDATE 1:25pm– APS has informed Parker Live that seven (7) power poles are down in the area near Badenoch’s, one of which fell onto Highway 95. The highway is blocked until they remove it. Crews will be working to restore power as soon as possible.

UPDATE 1:28pm– Local temp dropped to 74 degrees (current) in the Town of Parker.

“Every road IN or OUT of Parker is CLOSED right now!! and PowerLines down over Highway 95 north or BWC!! So you can’t even go UPRIVER!!” – K.O., Facebook

UPDATE 1:35pm– The National Weather Service has just extended its Flash Flood Warning (the highest warning level for storms of this type) until 3:30pm, saying that this is a “significant” weather event “with rainfall totals approaching the 100 year average recurrence” rate. Mentioned in particular: Parker Dam, Earp, Big River, Parker, Buckskin Mountain Park and Bouse. Also of note: “Between two and three inches have fallen between 11am and 1pm in some locations.”

UPDATE 1:56pm– Mohave County has been added to the Warning. 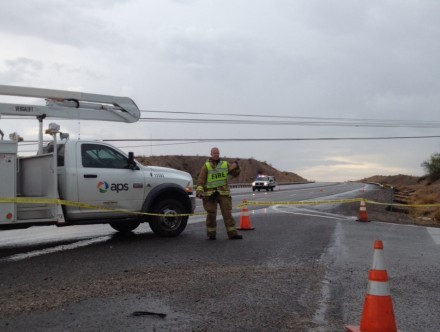 UPDATE 7:44pm– A lengthy network outage has ended and this website has been restored. APS told us 3 hours ago that they have restored power to all APS customers and are continuing to work on restoring power to non-APS people whose power is still out. Scores of APS trucks were on Highway 95 this evening while a traffic detour remained in effect (see picture below). KLPZ Studios received a third of an inch of rain today, while Parker Airport recorded just over two-thirds, along with a wind gust of 56 mph. 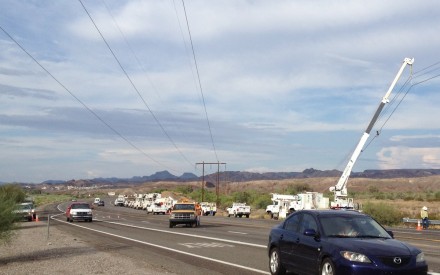