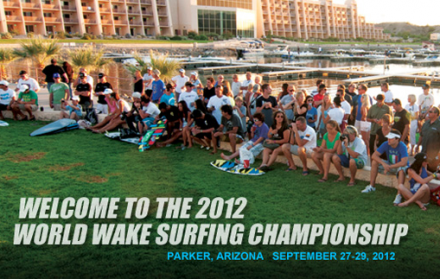 BlueWater Resort & Casino will host the Centurion World Wake Surf Championships September 27–29. The river in front of BlueWater will again be teaming with a competitive watersport. Scheduled to compete are 147 world’s best riders and the best view to watch these athletes is the River’s Edge Cantina at BlueWater’s Resort & Casinos beach.

The Centurion World Wake Surfing Championship boasts the largest cash prize purse in organized wake surfing.  A staggering $40,000 cash has been allocated for the Pro Surf & Pro Skim style wake surf divisions, with equal payouts for men & women.  Historically, the World Wake Surfing Championship has released unprecedented awards of $20,000 and $15,000 in 2011 and 2010 respectively. The popularity of wake surfing in watersports today has helped Centurion to raise $40,000 doubling last year’s purse. In addition to cash, there will be $15,000 worth of prizes awarded.

Divisions will include amateur, outlaw, masters (40+) and professional for both men and women. In the outlaw, and pro divisions competitors are separated into two categories called skim and surf based on the style of rider creating a total of twelve divisions and on September 29, twelve Champions! Tournament Director, Todd Gaughan said, “We are elated that the event has been able to double last year’s purse. It’s a true testament to the validity of the sport of wake surfing.” Competition begins Thursday, Friday and Saturday at 9am and can be watched from the patio of the River’s Edge Cantina or via webcast on www.theCWSA.org starting Thursday, September 27 at 9:00 am PDT.

For more details on this event, contact the Events & Entertainment Department at BlueWater Resort & Casino at (928) 669 7036 or visit bluewaterfun.com.