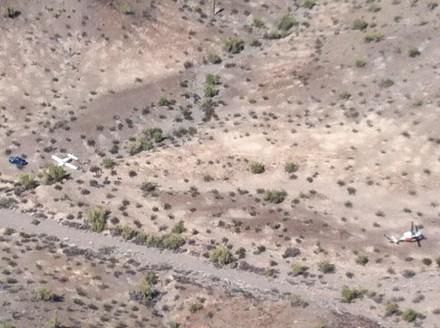 The occupants of a plane flying from Santa Monica to Prescott are OK after the pilot had to ditch his plane in the desert near Parker.

The pilot flew his Cirrus 4-seat aircraft from Santa Monica, CA to John Wayne Airport to pick up a passenger before heading out to Prescott, AZ. While flying over the Colorado River area the plane ran out of fuel, and the pilot had to look for an area to make an emergency crash landing.

Buckskin Fire Chief Chris Chambers said he was lucky. “There are 150 feet of skid marks. He came off a knoll. The plane held up really well,” he said.

Another plane flying overhead saw the aircraft on the ground and picked up either an emergency beacon or radio, which was used to call help to the area. Native Air found the plane and stayed with it to guide Buckskin Fire Department to the area, which Chambers says took around 2 hours.

The Marine Corp. Search & Rescue from Yuma, AZ also attended, and flew the occupants out to Castle Rock Shore.