Foster to be seated by court order

John Wright October 17, 2012 Comments Off on Foster to be seated by court order 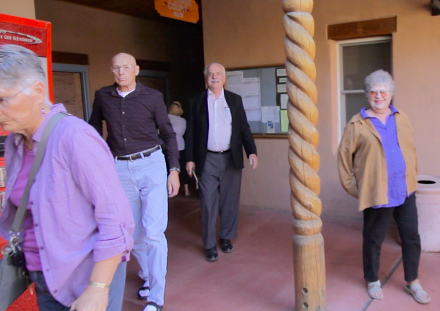 Ed Foster is to take his seat Tuesday as Mayor of Quartzsite after a court ordered the Town to seat him, 5 months after his election.

La Paz County Superior Court Judge Michael Burke ruled that an ordinance used by the Town to prevent Foster taking his seat was not valid, and ordered that the Town pay Foster’s legal fees. This comes after the Town Council voted 4-2 last week to reject a settlement deal agreed by the attorneys in the case.

Foster will join Mark Orgeron on the council, who was also denied his seat as a council member and was finally seated by federal court order in August. Both candidates were elected in the May 2012 election, but subsequently blocked by a council decision to “disqualify” them, which both courts have now ruled illegal. The status of Town Attorney Martin Brannan, who advised the council on the matter at the time, is currently in question, with the Town insisting that he is in full employment but with Brannan absent from all recent Town meetings and having withdrawn from the Foster case.

In oral argument, Foster’s attorney Julie LaBenz told the court that the ordinance used to disqualify Foster was illegal. The ordinance, which purports to add extra qualifications for running for office on top of what state law requires, was used against Foster because he reportedly owes the Town money. LaBenz argued that this was an attempt to establish two classes of people, one of which could be elected and one of which could not because of owing money. She argued that this stands against the fair elections process that is the basis of the American system of government.

Ultimately, Judge Burke agreed that the ordinance was illegal, and added that even if the ordinance were legal, he did not see that Foster stood to legitimately be disqualified because of it.

The court ordered Foster to be sworn in at Tuesday morning’s regularly scheduled council meeting. He will then take his seat and commence Town business.

Foster said he expected the court’s ruling: “We told them months ago that their action was illegal. This has cost the Town of Quartzsite a lot of money, if you look at Mark’s [Orgeron] fees, and the voter fraud investigation, and my legal fees. We need to now go about putting Quartzsite back on track.”