John Wright October 23, 2012 Comments Off on Foster takes seat as Mayor of Quartzsite 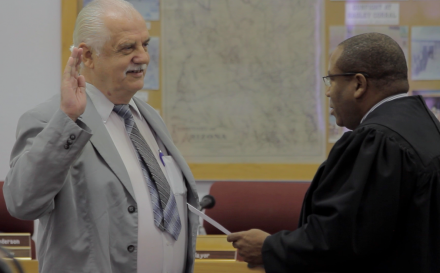 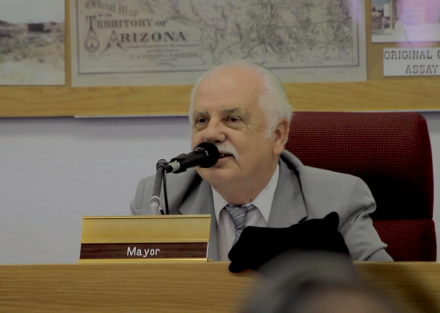 Ed Foster took his seat as the Mayor of Quartzsite Tuesday morning after prevailing in Superior Court last week.

A resolution complying with the order of Judge Michael Burke was passed by the council, with all present members voting to seat him immediately. Foster, who was sitting in the audience, got up and said he had asked Magistrate Court Judge Lawrence King to swear him in. A town clerk went next door with the paperwork while a packed council chambers waited, and came back moments later with Judge King, who shared a handshake with Foster and then swore him in as Mayor.

Foster took the seat at the center of the seven-member council dais which had remained empty since May, and joked, “Let’s see if I remember how to do this,” before calling the meeting back to order. He then continued the rest of the agenda for that morning, which included revoking the role of a chairperson separate from the mayor. Senior council member Patricia Anderson, who had been chairing the meetings, passed the gavel to Foster.

It’s been 5 months since Foster was elected and prevented from taking his seat by political opponents on the council and in Town administration. Three of those who voted against seating him in May have now been replaced by Foster, Pat Workman and Mark Orgeron, who also had to fight for his seat on the council and prevailed in federal court. The Town Manager Alex Taft and her assistant Al Johnson have been placed on administrative leave, and the contract of Town Attorney Martin Brannan – who advised the council they could disqualify Foster and Orgeron – is being reviewed by the new council tomorrow, with discussion about his dismissal or resignation on the agenda.

Foster said it was a new day for Quartzsite. “It’s time to try to fix what’s wrong with the Town,” he said later. “I thank the people for their patience. I really appreciate all their support over the last 5 months.”