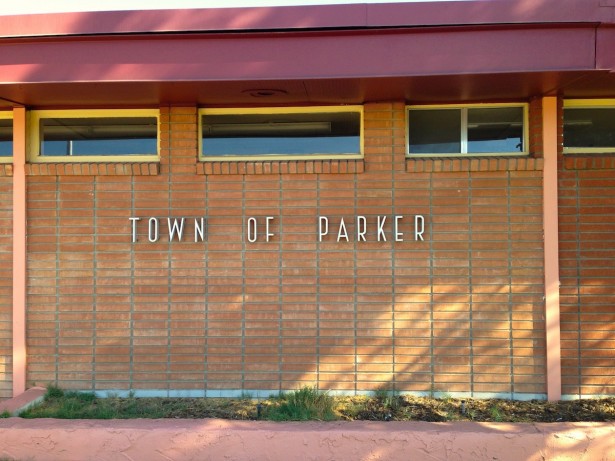 In a statement Parker Police Chief Rod Mendoza says was read into the record at Tuesday night’s Council meeting, the Town of Parker explains why it shut the Narcotics Task Force building down and removed equipment, money, guns and other items from it.

Saying that it has not been reimbursed by La Paz County for the building since February 2013, the Town says it shut the building down for financial reasons and removed the assets inside so that the Task Force could continue operating out of Parker Police Department.

Two weeks ago, the La Paz County Sheriff’s Office said it would be taking command of the task force on June 1st, 2013. The Town’s latest statement complains that this “demand” involves backing out of a current intergovernmental agreement which was renewed for another 5 years in 2012, saying, “The Sheriff wants control and complains about productivity even though they have not had a single deputy assigned to the Task Force in two years.”

The entire statement by the Town of Parker is included below. For all articles about the Narcotics Task Force (including a war of words between Sheriff Drum and Quartzsite Police Chief Jeff Gilbert, a recent spate of arrests by the Force and announcements on the future of the Task Force), CLICK HERE.

“During the last two years Parker Police Officers have been the only members of the Task Force combating drug activity throughout the entire county. The Sheriff’s Department has not assigned a deputy to assist us until a few months ago. During these last two years Parker Officers have worked effectively with the Department of Public Safety (DPS), Drug Enforcement Agency (DEA), HIDTA, Boarder Patrol, Mojave County Task Force, Phoenix PD Task Force and the Colorado River Indian Tribes.

Last month The Task Force completed an eight month investigation and served 10 arrest warrants on individuals for sales of drugs and narcotics. Parker Officers have been the sole entity keeping the Task Force operational during the last two years working cases throughout the County and will continue operating as per the IGA agreement.

On the evening of May 14, 2013, the Parker Town Council was fully informed that the County Administrator denied reimbursing the Town of Parker operating funds for the Task Force building and salaries for the Task Force officers. Historically the Town of Parker pays all Task Force bills and then will be reimbursed from the RICO account which now controlled by the County. However, by State Statue the County Attorney is supposed to be responsible for controlling all RICO monies.

Currently the County has not reimbursed the Town since February 2013 and now owes the Town over $63,000. The decision to close the Task Force building was a financial move. The Town needed to be reimbursed for their expenditures. The equipment removed from the building was simply relocated to the Parker PD in order to continue working Task Force operations. Parker is still working within the IGA and will continue to combat drugs that plague our county.

After the Task Force Building was closed for lack of payment, the Task Force relocated to work from Parker PD. We then notified DPS Captain Campbell, DEA agent in charge of La Paz County, Assistant Director of HIDA Ralph Ogden and all three supported what we were doing and reconfirmed their full support of our operations. There was never any criminal activity by this move as the Sheriff incorrectly stated.

Our current Task Force IGA was signed by all entities in 2007 and renewed for another five years in October of 2012. The Sheriff Department now demands to back-out of this agreement and sign a new agreement giving a majority of the authority to the Sheriff’s department and away from the current NTF board. The Sheriff wants control and complains about productivity even though they have not had a single deputy assigned to the Task Force in two years. It was just a few months ago he assigned a Lieutenant to the detail.

The current Task Force IGA consists of the County Attorney, whom is the chairman, Quartzsite PD, the Sheriff’s department and Parker PD. We have reached out to other entities to become board members but the Department of Public Safety and DEA have both stated they would rather just offer their full support whenever needed.

I spoke with Border Patrol agent in charge of the Blythe Station and he is working on an agreement to join our Task Force. The current NTF board welcomes new board members to assist us in our mission.

The County Attorney is the Chairman of the Task Force and has told the Sheriff numerous times that any new proposed IGA must be reviewed and approved by all entities of the current IGA.

Our mission has never changed. We are committed to eradicating the criminal activity surrounding the use and sale of drugs and narcotic in our communities. We have and will continue to effectively work with all Federal, State and Tribal agencies. We are looking forward to having the county release the RICO funds to reimburse our officers and for the maintenance of the Task Force building in order for us to resume normal operations.

Per Arizona State Statue the County Attorney is the chairmen of the Task Force and we will patiently wait until he has had time to review all the legal, State and Federal issues that need to be addressed in the Sheriff’s proposed IGA.

In closing, the Town of Parker will always work with all entities to enhance the quality of life and in the protection of all citizens of La Paz County.”