Quartzsite newspaper publisher in spat with Town over pit bulls 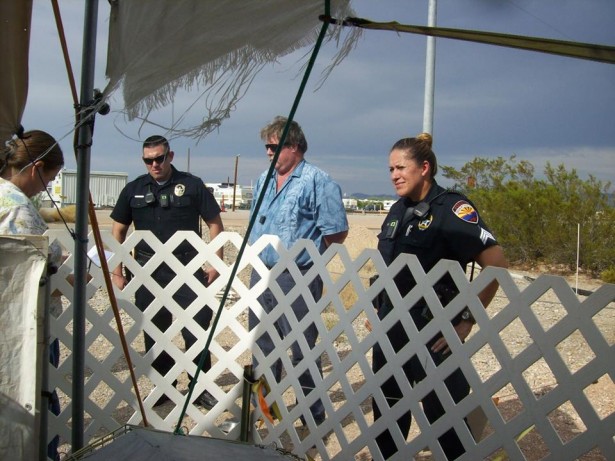 Jennifer ‘Jade’ Jones, dog groomer and publisher of the Desert Freedom Press in Quartzsite, is engaged in a war of words with the Town of Quartzsite after the Town says it sent law enforcement agents to inspect her property.

A Town of Quartzsite press release, which calls her a “local tabloid blogger”, says Jones was in violation of some Quartzsite laws, including “operating a dog kennel that is not in compliance with the laws of Quartzsite.”

“The Jones’ have been residing as renters at the Rice Ranch RV Park, and have been operating at least one business at this location. None of Jones’ businesses are legally permitted to operate within the Town of Quartzsite. After requests to inspect the RV site were refused, Quartzsite authorities obtained and served an Inspection Warrant late Thursday afternoon.”

The press release says the Town found more than 15 pit bull dogs in kennels in a mobile unit, and that there was an “overwhelming stench and very hot conditions inside”.

Jones says the press release “contains blatantly false and libelous statements intended to cast doubt upon [her] proper treatment of animals” and that she has operated a “highly respected pet grooming and pet sitting business for 13 years”.

“If the search of my travel trailer revealed any evidence that the dogs were being mistreated I would have been cited or arrested on the spot. I believe this warrant was nothing more than a fishing expedition for that very purpose and based on false statements made to the court by sworn affidavit – a felony crime. I believe the fact that I was not cited or arrested is because the Town does not have the jurisdiction that they claim.”

The pit bulls are bred by Jones for shows, she says. “I showed many of them to champion status with two different dog registries before the Town’s officials tied me up with court dates by filing over 620 separate false counts against me in roughly a two year period. I make no secret of the fact that I own several dogs, it’s common knowledge. All charges were dropped ‘in the interest of justice’, or I was acquitted.”

The Town of Quartzsite and Mrs. Jones have not had an amicable relationship for many years. In 2011, a video showing Jones being ejected from a town council meeting for expressing her opinions at the podium while the Mayor objected went viral on the internet and led to nationwide interest in the feuding in the town.

The Town says it will be issuing citations for the violations it found on Jones’ property. Jones says her attorney will be filing damage claims against the Town for “harassment under color of authority.”