Sheriff and CRIT partner up to get tough on meth 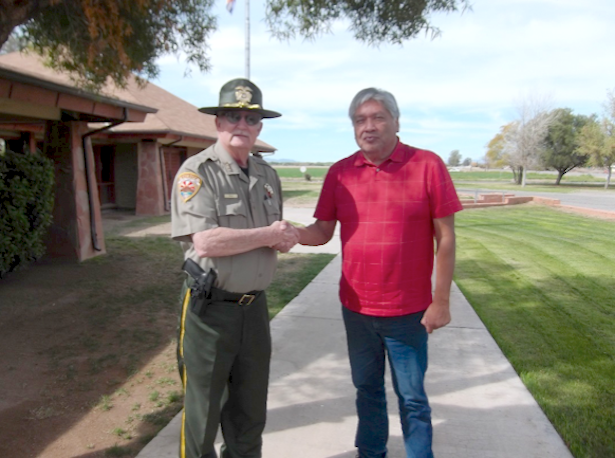 A Sheriff’s Office Press Release says: “Over the years, non-Tribal Members have been coming to the reservation to use it has a hub for trafficking everything from humans to methamphetamine. The CRIT Police Department has been working diligently to combat this issue but with the low numbers of officers compared to the high volume of traffic, focusing specifically on narcotics was an issue. Within the past few years, we have noticed that the number of serious felony offenses (homicides/home invasions) has spiked. We feel that this is directly related to amount of illegal drugs, specifically methamphetamine, which has made it into our Communities.”

The La Paz County Task Force is in the process of re-establishing their grants with the Arizona Criminal Justice Commission and Arizona HIDTA. The grants, along with the partnerships with the U.S. Border Patrol, Riverside County Sheriff’s Office, Drug Enforcement Administration and now the addition of a CRIT Detective to the unit, would provide the Task Force with the manpower and resources to combat the methamphetamine issue. “We also [believe that by reducing] the amount of methamphetamine that comes into La Paz County and the Reservation, we will also reduce the amount of violent crime that always comes with meth use,” says the statement.

Both Sheriff John Drum and CRIT Chairman Dennis Patch (pictured), say they are confident that this partnership will be successful and they look forward to seeing positive results very soon.