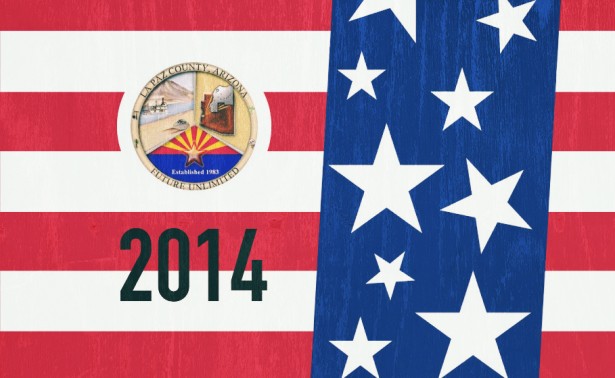 This (we think) includes all votes but are still not final or official.

UPDATE 8/27 3pm: How about trying to game out the Precinct 6 Justice of the Peace race? Here’s some extra information that might help us with a prediction.

(1) When we add uncounted votes from the Recorder’s office, there are 258 votes still outstanding (not yet counted in the below totals). But that’s for the whole county. For Precinct 6, we need to narrow it to Republican ballots only and narrow it to the Town of Parker, Upriver, Bouse and Poston. And so we get 94 uncounted votes in the Precinct 6 Judge race.

(2) We can now compare how people voted by area yesterday with the number of votes outstanding in each area. Are you with me? We can look at the trends. Yesterday, here’s how it broke down with the number of uncounted votes beside:

(3) We can now give the candidates percentages. Like this:

Still very close, and could be thrown off by the littlest factor. This also assumes that none of the uncounted votes are for Write-In candidates, which would change things slightly (only around 2% wrote in names on the ballot). It also involves some approximating of percentages, but gets us close enough. So, our official word is that this is still too close to call, but I hope that helps you game it out, if you’re interested. Will I be right or wrong? We should know the final unofficial results sometime on Thursday.

And with 140 provisional + late early ballots still to count, this race is too close to call. Final results expected in the coming day or two.

Arizona’s primary election comes Tuesday, and with it Parker area voters will decide who their next justice of the peace will be.

Each Arizona county has justice courts that are presided over by a judge who is elected for a four year term. Cases include civil lawsuits where the amount in dispute is $10,000 or less, landlord and tenant controversies, small claims cases and the full range of civil and criminal traffic offenses, including DUIs. Justices of the peace also resolve other types of misdemeanor allegations (e.g. shoplifting, writing bad checks, violating restraining orders) and, like other trial judges, also handle requests for orders of protection and injunctions against harassment.

The advertising schedule at KLPZ 1380am has been sold out in the last days of the election with both local and state candidates vying for airtime. Each of the local candidates emphasized the importance of getting out to vote, with only one day left to sway potential voters. See a list of polling places HERE.