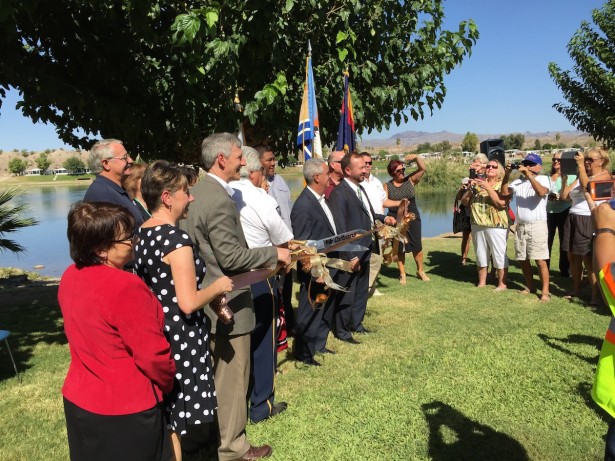 Representatives of many agencies and offices were in attendance Wednesday morning at the Ribbon Cutting Ceremony to mark the opening of a new bridge between Parker, AZ and Earp, CA.

A sizable crowd showed up to be a part of history, an echo of the grand opening of the original bridge 77 years before. Tribal birdsingers started the ceremony, before several speakers took the podium for comments ahead of the ribbon-cutting.

Director of the California Department of Transportation Malcolm Dougherty said there were more than 50 entities involved in making the project happen, which replaced an aging, narrow road bridge with a wider, 4-lane modern version and, according to Dougherty, “reset the life of this vital connection” between the states of Arizona and California.

Dougherty said the project was “dual-funded” between Caltrans and ADOT, with funding coming from the Federal Highway Administration also. He praised the entities involved, with specific mention of the Colorado River Indian Tribes, the Town of Parker and the two states. He also expressed his gratitude for MCM Construction, the contractor used for the project.

“How nice an entrance it is, both ways,” Dougherty said. “It’s a great day to be here.”

Deputy Director for Arizona Department of Transportation Jennifer Toth shared Dougherty’s sentiments, citing the history of the original bridge in 1937. “The opening of that bridge was quite an affair and an event, with the Who’s Who of Arizona and California in attendance,” she said. “This is an opportunity to celebrate the power of working together.”

Other speakers included Steve Moffitt representing the office of San Bernardino County Supervisor Robert Lovinggood, who said “Everybody will benefit from this”, Secretary of the CRIT Council Amelia Flores, Director of the Parker Area Chamber of Commerce Mary Hamilton, Chair of the La Paz County Economic Development Corporation Roberta Hoffman and Mayor of the Town of Parker Dan Beaver.

Beaver said it was a surreal experience for him, being at the event. “77 years ago, almost to the day, my grandparents were at the original bridge opening, my parents were at the dedication of the bridge years later and now I stand here as this new bridge is opened.”

He also mentioned Clara Osborne Botzum, the local woman who lobbied for construction of the original bridge nearly 100 years ago. “She carried the torch,” Beaver remarked.

A ribbon of gold and copper, representing the two states joined by the bridge, was cut by the officials in attendance as a large crowd snapped pictures.

The bridge is now open, but some work – including lampposts and cleanup – is still going on. 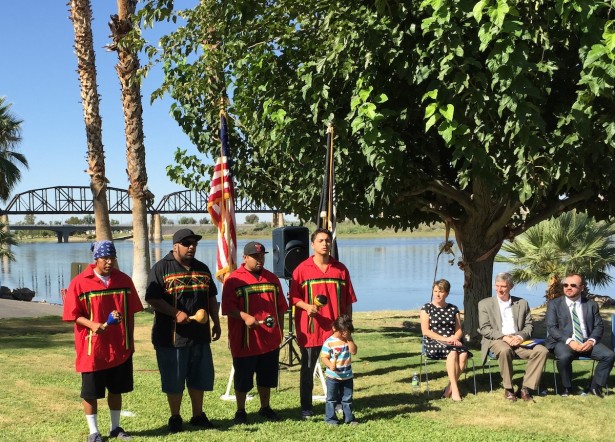 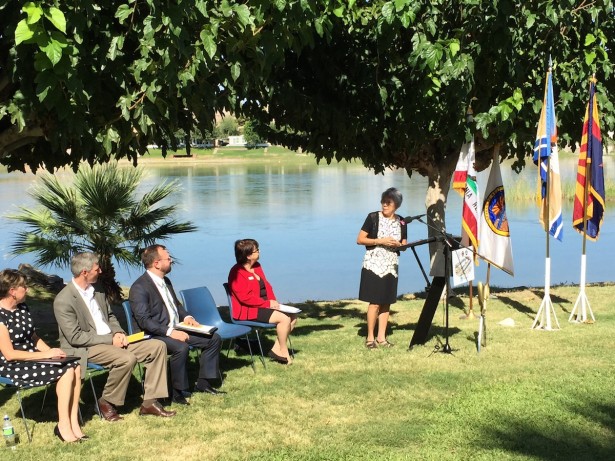 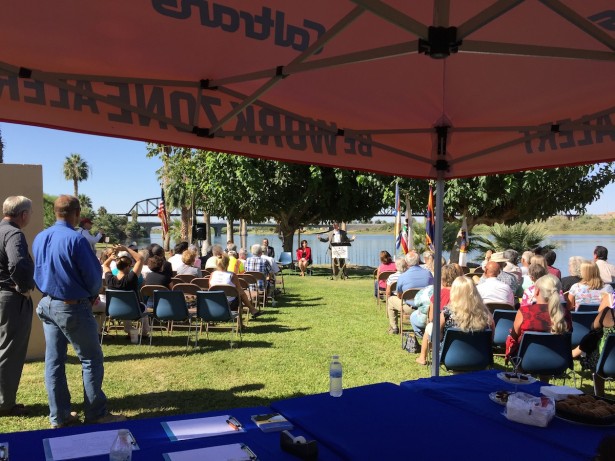 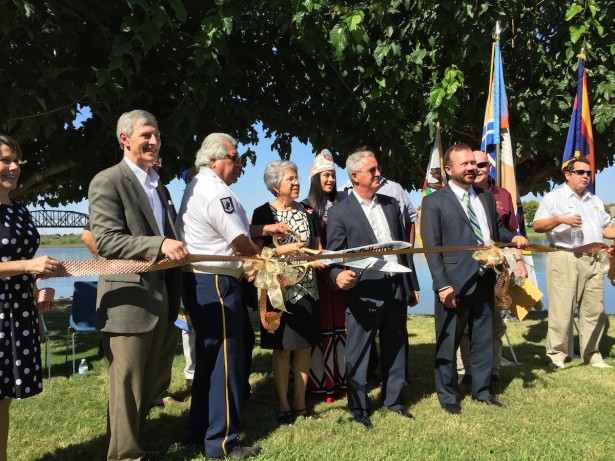 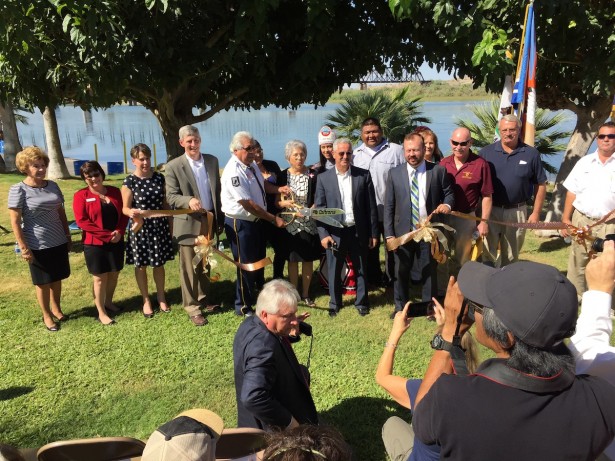 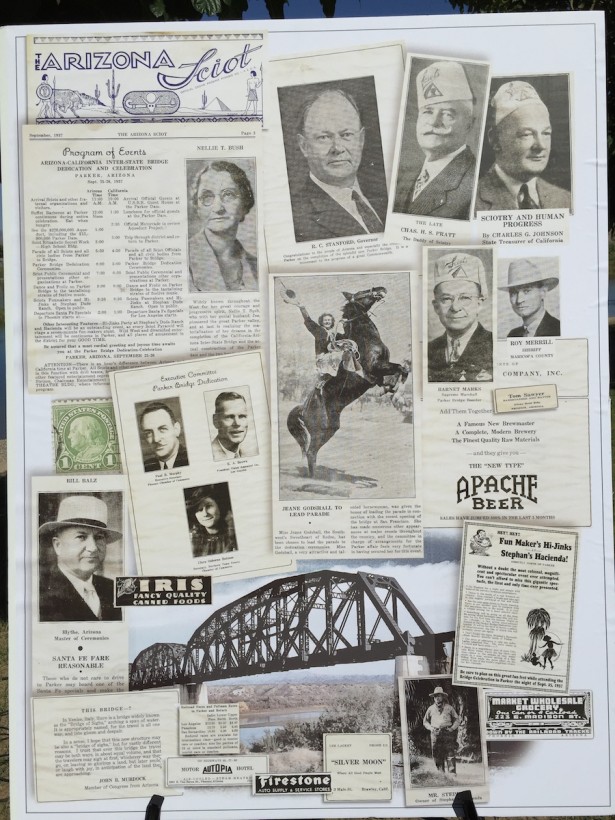 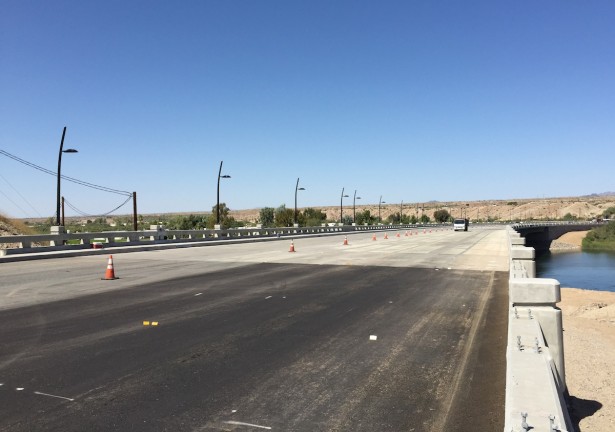