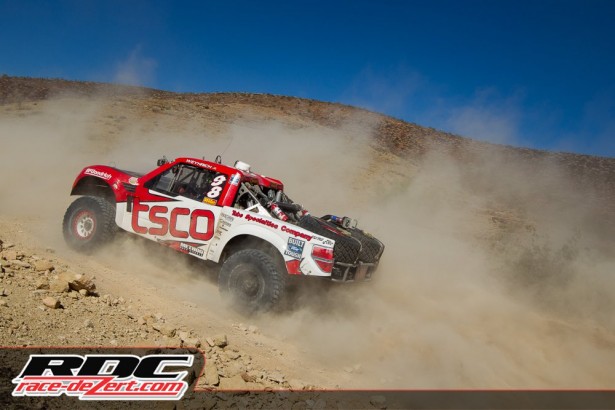 Race leaders were dropping like flies all day Saturday, as the BlueWater Resort & Casino Parker 425 presented by Impact kept everyone on their toes.

The first big news was that crowd favorite Robby Gordon had dropped out after less than half a lap, a problem with the motor in his #77 trophy truck leaving him in need of a tow. An hour later he got going again briefly before going out of the race permanently. Dale Dondel, the fastest vehicle in the time trials, took the lead for a while before breaking down too, with other high qualifiers Justin Lofton and Jason Voss also dropping out of lead positions at various points in the 425-mile race.

It ended up being dark horse Gary Weyrich who took the overall win in 7 hours, 8 minutes and 23 seconds, followed by Luke McMillin and Tim Herbst. Weyrich said he had had 5 second-place finishes in Parker before this win. His GPS tracker stopped working early in the race, keeping race watchers in the dark about how well he was really doing in the #98 truck, and surprising even the announcer at the finish line.

Harley Letner took first in the 1500 class, and many Parker locals finished the race too, including Dustin Hoffman, Ron Gibbs, Adrian Diaz and Cole Sieber.

An estimated 30,000 people were in Parker to watch the big event in person, with Best In The Desert Director Casey Folks saying the Parker area is “off-road capital of the USA.” Overall 104 race teams out of 212 finished.

For a wrap-up of the race, listen to Jim Beaver’s Down & Dirty Action Motorsports Radio Show (after Monday at 10am AZ) HERE.