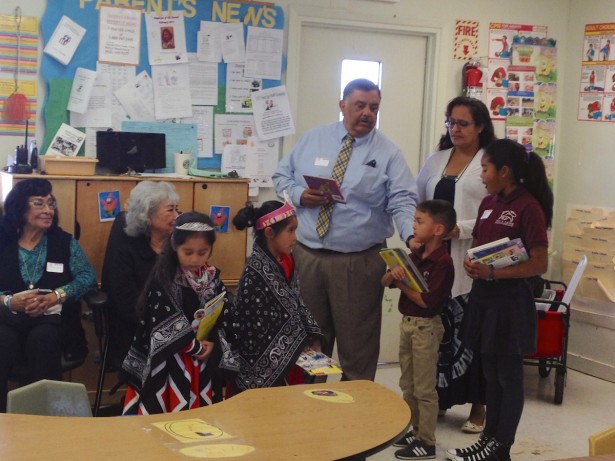 Lanna Flood had a passion for working with young children, so it was a fitting tribute when members of Parker Apostolic Church made a special donation in Flood’s memory to students at the Colorado River Indian Tribes Head Start preschool.

Church members collected more than 100 children’s books to stock 10 mobile carts donated by First Things First as part of the “Lanna’s Libraries” project. Flood served as Regional Director of the First Things First Colorado River Indian Tribes Regional Partnership Council from 2008 until the time of her death in 2012.

Flood’s family joined Head Start staff and students, as well as Parker Apostolic Pastor Jose Garcia, for a special ceremony Thursday, February 26th at the Head Start Center on Mohave Road in Parker. Garcia said his congregation wanted to honor Flood’s memory by promoting early literacy for all children in the community.

The project was also special to church members, who wanted to honor Garcia’s late wife, Rachel. Rachel, like her husband, was a supporter of early childhood programs. A scholarship in her name for $1,000 was recently awarded to Parker student Elaine Duncan, who plans to study early education.

Pastor Garcia is a faith representative on the First Things First La Paz/Mohave Regional Partnership Council and Rachel served on the CRIT Regional Partnership Council from 2008 until the time of her death in December 2013. FTF partners with programs that support early literacy, because research shows that children who read at an earlier age are more prepared when they enter kindergarten and do better in school.

Amelia Flores, who serves as the trial representative for the First Things First CRIT Regional Partnership Council, said the Tribal Council was grateful for the church’s efforts.

“Lanna was such a special person,” Flores said. “She had a passion for working with the Head Start students.”

Flood’s mother, Vicki Laffoon, as well as members of her extended family, said they were touched by the church’s efforts in Lanna’s name. Linda McCabe from the CRIT Department of Health and Social Services worked with Flood and offered a statement on behalf of Executive Director Sylvia Dawavendewa that described Flood a champion for young children.

“Lanna was a special person dedicated to the education and support of children wherever she worked. She was a wonderful example to us all.”

McCabe then added her own comment after seeing the children with smiles wide on their faces rush the cart to look at the new books.

“Lanna would have loved this,” she said.