Water in Parker: the illusion of plenty 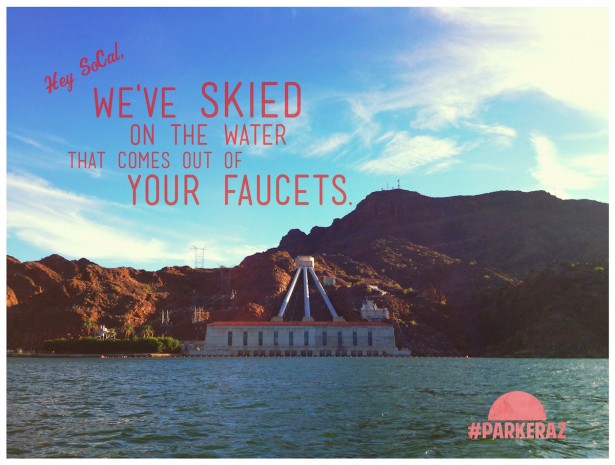 With the fourth year of record-breaking drought, the claim that California has only one year of water left in its reservoirs is pretty headline-grabbing.

It’s also not quite true, according to Jeffrey Kightlinger, the general manager of the Metropolitan Water District of Southern California. Quoted in WIRED magazine, Kightlinger says the state will have ways of stretching water reserves out for as long as possible.

But it does raise the spectre of household water rationing; not the kind that seeks to throw you in jail for using more than your allotment, but the kind that makes your water really, really expensive if you go over a certain amount. “Those penalties usually drive people to push their water use down because they realize they can cut their bill in half,” says Kightlinger. “That’s when you see people going from seven-minute showers to two-minute showers.”

It’s easy to forget that there’s a drought when Lake Havasu and Lake Moovalya are full of beautiful, crystal clear water and the bigger cities around us are lush with green lawns and landscaping. But that may begin to change soon.

Even bigger water users are agricultural, according to the WIRED piece. Agriculture uses 80 percent of the water supply. And this will affect the rest of the nation: about half the produce consumed in the U.S. is from California and includes wheat, nuts, grapes, tomatoes and all kinds of other fruits and vegetables that end up in grocery stores. Arizona, too, is a leading agricultural producer of lettuce, citrus fruit and cotton, among other things.

The Parker valley, a rich agricultural area made possible by irrigation, is theoretically safe because it is part of the Colorado River Indian Tribes reservation and utilizes water rights owned by CRIT. But CRIT officials, speaking at the recent 150th year commemoration of the establishment of the reservation, are warning that their water rights will be under attack in the coming months and years. With water becoming a more precious resource, municipalities will be turning their attention anywhere they can get it. “The fight over our water lies ahead of us,” said CRIT Council Chairman Dennis Patch.

So, as we enjoy the river this summer, it’s worth remembering how precious the stuff we’re wakeboarding on is becoming. Lake Powell and Lake Mead – the two largest lakes in the Colorado River system – are less than half full. Our own piece of paradise downstream is the illusion of plenty.