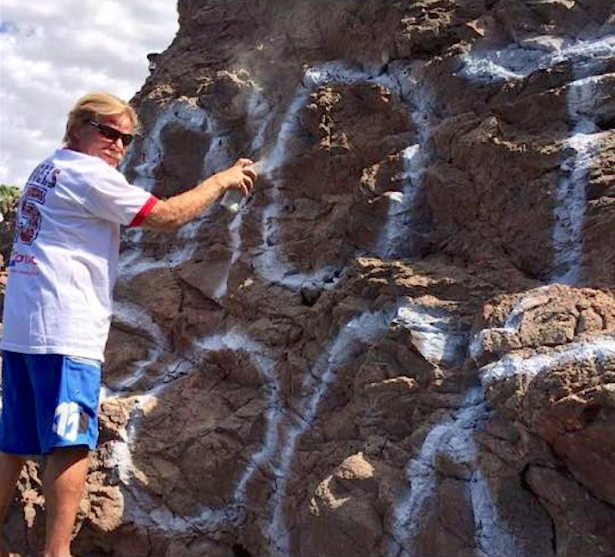 A photo circulating online since last night seems to implicate a Corona, CA man in an act of vandalism on the Parker Strip.

The photo was posted to a public Facebook group called ’10 Ways You Know You Grew Up/Live In Corona, CA!’, identifying him by name as a 60-year old Corona resident. The post says his name is Bob Garland, and claims that he posted the photo to his own Facebook page.

The spray-painted words say ‘IDIOT ROCK’, the name colloquially given to the area on the Parker Strip where people jump off into the river near Sundance Saloon.

Parker Live has learned that complaints have already been received by the La Paz County Sheriff’s Office and they are currently dispatching the Bureau of Land Management, whose jurisdiction it is, to investigate the claims and take appropriate action at this time.

The anger about the incident is stirring on social media, with many sharing the post and calling for action against the perpetrator of the vandalism. The natural beauty of the Strip is highly prized by locals and visitors alike.

UPDATE 8/11: A special procedure is to be done to clean the paint off the rock without polluting the water. A company which specializes in the procedure is being called to do it, and whoever is found guilty for the vandalism will be responsible for the cost, which is likely to be in the thousands of dollars.

UPDATE 8/12: A warrant will be issued if and when Bob Garland returns to the Parker Strip, according to the Sheriff’s Department. Charges: criminal damages/criminal littering.

FEATURED COMMENT #2: “My story of idiot rock is that I’ve seen a lot of bad things happen there so I named it idiot rock by painting it in 1979 and over the years as it started to fade I always said I’m going to repaint it as part of my bucket list. I’m sorry that I affended anybody. Ill never paint anything again and ill take whats comming to me I’m sorry!” – Bob Garland. Join the conversation below.