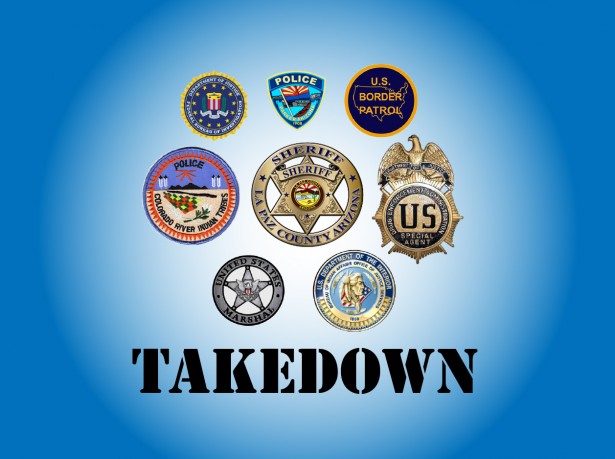 Parker area streets were teeming with law enforcement agents from federal and local agencies Tuesday as 11 people were taken into custody in short succession over alleged drug trafficking.

“For approximately the past year, we have been conducting a series of narcotics-related investigations within the CRIT reservation, including the Town of Parker,” said Lieutenant Curt Bagby of the Task Force. “During these investigations, undercover detectives and confidential informants have been purchasing methamphetamine from several alleged drug dealers in and around the reservation. After making multiple purchases from each target, the Task Force closes out each case by presenting the cases to the Federal Prosecutor’s Office who then sends the paperwork to the Federal Magistrate and issues a warrant for the suspect’s arrest.”

Residents woke up to dozens of armed agents on the streets for the arrests Tuesday morning, with a ‘temporary task force’ assembled to make the arrests and serve the warrants simultaneously.

A spokesperson for the DEA said the federal agency wants to protect areas like CRIT from the dangers associated with meth.

“The DEA is committed to protecting Arizona tribal communities from the dangers of methamphetamine, which undoubtedly scars the person and the community it plagues,” said Doug Coleman, Special Agent in Charge of the DEA in Arizona. “Drug traffickers who exploit the tribal community in which they live, to hide from law enforcement, will find no such refuge. DEA Agents, with our state, local, federal, and tribal partners, will pursue, target, and bring those criminals to justice.”

An indictment is simply a method by which a person is charged with criminal activity and raises no inference of guilt. An individual is presumed innocent until competent evidence is presented to a jury that establishes guilt beyond a reasonable doubt.

The investigation is ongoing and additional arrests are anticipated. The prosecution is being handled by the U.S. Attorney’s Office, District of Arizona, Phoenix.

“The La Paz County Task Force asks that you please remember that everyone is innocent until proven guilty,” Bagby said. “If you have information regarding any illegal activity please contact your local law enforcement agency or you can call the Task Force directly at (928) 669-9645. You can also send information anonymously at lapazsheriff.org.”