Attorney connected with Quartzsite conflict may be disbarred

An attorney who was involved in a political conflict in Quartzsite, AZ is at risk of being disbarred, according to a column at Forbes.com. 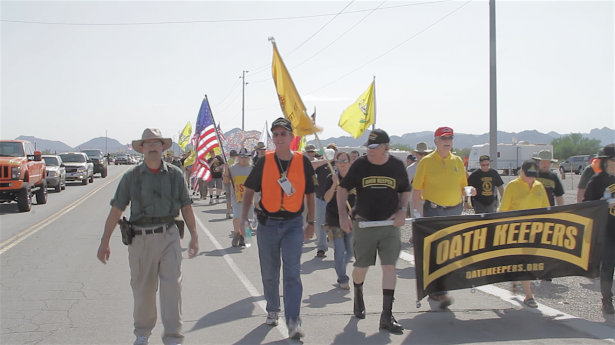 Elmer “Stewart” Rhodes, founder of an organization associated with the patriot movement called Oath Keepers, represented Quartzsite residents Michael Roth, Jennifer ‘Jade’ Jones and Mayor Ed Foster in civil suits in federal court. The cases arose during a period of intense political turmoil in the town, which first made national news when Jones was removed from a Town Hall meeting by the police chief at the time, Jeff Gilbert.

The Oath Keepers held a rally in Quartzsite in August, 2011 drawing dozens of protesters, some armed, who chanted, “Nazi police chief resign” and other slogans against Gilbert and the town council. Rhodes led the rally with Mayor Foster, Jones, Roth and others, and it was a shot in the arm to the group in Quartzsite who had made public allegations of corruption against the council and chief.

“The Oath Keepers was set up to support those who took oaths of office to defend the constitution,” Foster told Parker Live.

The majority of Quartzsite’s police officers had signed a document alleging that Gilbert was abusing his authority, and the rally was held partly to support the embattled officers. Jones and Roth had both been arrested by Gilbert.

“[Rhodes] came in and rallied with us and signed contracts to represent us in court. He was a big disappointment, that’s all I can say.”

On May 12th, 2014, Roth lodged a complaint against Rhodes accusing him of providing incompetent representation and abandoning him in his civil suit in federal court, according to the Forbes piece. The article mentions that Jones was unable to reach Rhodes too, finding herself “without a lawyer in the middle of a civil case in federal court.”

Foster says he simply fired Rhodes when he stopped responding.

“I tried to contact him numerous times,” he said. “He wouldn’t answer calls and he wouldn’t answer emails, so I just decided that I wasn’t going to pursue him. I sent him a message saying that I consider the contract void.”

The Oath Keepers’ rally in Quartzsite was just the beginning of the organization’s series of confrontations with government entities. They made national news again in 2014 when they held a heavily-armed standoff against the federal government at Bundy Ranch in Bunkerville, Nevada, with Rhodes leading the charge. But he left Quartzsite’s Foster, Jones and Roth in the lurch.

“I’m not sure what went on. Someone said he was having family problems. I’m not sure. Something went wrong with him and he went off the rails,” Foster said.

Montana Supreme Court’s Office of Disciplinary Counsel recommended last week that Rhodes be disbarred after the latest complaint against him alleged that he had filed a case in Arizona without a license to practice here.

Gilbert’s police certification is to be reviewed later this month by the Arizona Peace Officer Standards and Training Board, AZPOST, according to Foster.

UPDATE: Gilbert says he has been cleared of wrongdoing: “AZ POST has already dismissed all complaints logged against me which were primarily filed by Foster and Jones. The only remaining issue deals with the termination of the Quartzsite police officers, which I have confidence they will dismiss as well later this month.”