To The Editor: No turn lane at Desert Bar road as promised?

“Why the hell did we just pay almost two million dollars to widen Highway 95 at Cienega Springs Road when the lines are drawn exactly the same way as they were before? Was it a mistake? Or did taxpayers just buy some really expensive shoulders instead of a turn lane as promised?”

Thanks for that question, TURN.

We know the total cost for the ADOT project at AZ-95 and Cienega Springs Road; it’s $1.9 million (original news story HERE). And while that seems like a lot (because it is), the intersection at that location has been hazardous for a long time, with heavy traffic at times heading out to the famous Desert Bar and popular off-road recreation areas. Even this weekend, the road will be slammed with action for the annual Desert Dash. So, if the money will save lives and make us all safer, whether we’re using Cienega Springs Road or just passing it on the 95, we all get it, in one way or another.

Except, as TURN notes, if they’re not actually putting in a turn lane, why spend the money to widen the highway at all? What’s the point? 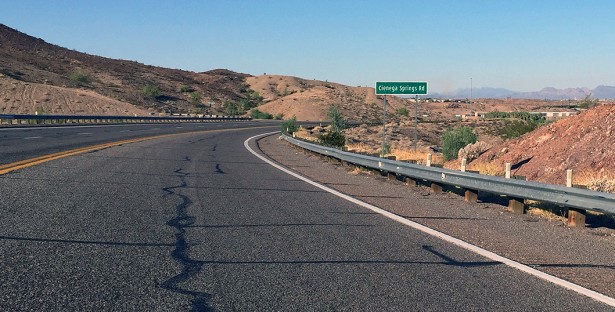 Well, it turns out, while the project may look finished, it ain’t.

“The State Route 95 southbound left turn lane project at Cienega Springs Road is currently in winter shutdown and the project is anticipated to be completed this spring,” says Dustin Krugel at ADOT, speaking to Parker Live. “Crews are expected to return next month to complete the final paving, which includes applying the top layer of asphalt to the roadway to make it smoother for motorists.”

Why the wait, you may ask?

“This type of work is temperature sensitive to be effective.”

Ah. And then, when will the lines be drawn for real, in all their safer goodness?

So, TURN, that road surface you’re driving on isn’t the final surface. Those lines aren’t the final lines. And the project seems to be following some sort of schedule (although, keen observers will note that the project was originally estimated to be finished already).

That’s roughly what ADOT is saying. And that really clears things up! Except for one final question that may have occurred to some of you already: why can’t a temporary turn lane be drawn in until the permanent one in a couple of months? Why do the temporary road stripes follow the old design instead of the new one, now that there’s enough road to put them down in the new way?

There’s no firm answer, though I imagine it may have something to do with standard operating procedures for newly engineered road projects. But, according to Krugel, later temporary striping may reflect the new design after the paving is done: “I’m trying to confirm this, but I believe once the final paving is completed, there will be new temporary striping that will reflect the change in the new traffic configuration.”

Either way, TURN, by later this spring, there should be a turn lane at Cienega Springs Road, and that’ll be a lot safer for everyone. Thanks to Dustin at ADOT for some quick responses.