Chaos at the Fair: Some injured as light rig falls at pageant 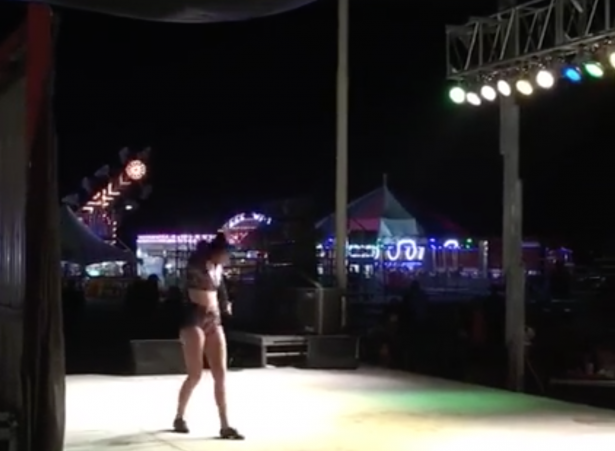 Wind was in the forecast area-wide for Friday night, with 35 mph gusts possible. But nobody expected the conditions to be as bad as they became at the Fair’s outdoor main stage, where the Miss La Paz Pageant was to be held.

Earlier parts of the show continued mostly as normal, despite the blowing sand and dust, and the flapping costumes. But the wind was heavy enough that many people who would have stayed to watch the show went home instead, blinking grit out of their eyes as they left.

Then, after a brief moment of calm, what some described as a “microburst” swept over the Rotary Stage and took the light scaffold with it, and down it came, reportedly injuring 5 people, the most serious of which was pageant tabulator Amber Byrd, who was taken away by ambulance but not expected to suffer serious or life-threatening injury.

Pageant director Aryn Romo told Parker Live she heard it before she saw it. “I heard the noise and knew exactly what it was,” she said.

The rig had landed in between the first row of seats and the judge’s table in front of the stage, and chaos ensued. Emergency personnel attended while the fairgrounds were shut down and the people sent home. Insurance companies reportedly wanted to evaluate the incident, and the pageant was off.

In a first for the Miss America affiliated pageant, Miss La Paz County then concluded its business several miles away at Blake Primary School, with families and friends of the contestants looking on as the on-stage questions, evening gown and crowning were conducted in the school cafeteria.

Amber Byrd, who was struck by the lighting scaffold, told Parker Live she would have more to say later, but said, “I’m ok and feeling pretty darn lucky this morning.”

The La Paz County Fair was open again Saturday for business as usual, and the weather outlook is much calmer with no elevated wind in the forecast. La Paz Youth Livestock Auction is scheduled for 1pm, Motocross will be racing all day and the music fest starts at 4pm.