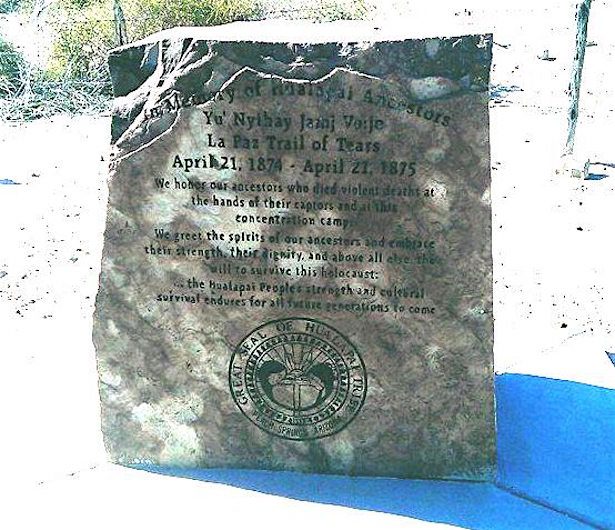 Ceremonial runners from the Hualapai tribe passed through the Parker area on Wednesday as they commemorate the annual La Paz Trail of Tears, a series of historical events which took place in April 1874.

Parker Live received many inquiries throughout the day from curious bypassers who saw the runners and wondered what the occasion is.

According to the Hualapai tribe’s website, the participants start the day in Ehrenberg, AZ – which is close to the historic La Paz site, a short-lived gold mining town near the Colorado River – and run almost 200 miles to the Hualapai reservation in Peach Springs, AZ every year. They are marking what the tribe calls a “traumatic turning point in [its] history”:

“In 1874, several years after the United States waged a campaign of ethnic cleansing against Indigenous groups in the region, the military rounded up hundreds of Pai’s and forcibly relocated them to the Colorado River Indian Reservation in Parker, Arizona. Children, the elderly, and the sick died on the two-week march, but more died of disease and starvation during their yearlong internment in the place referred to as La Paz at the sweltering northern tip of the Sonoran Desert. Nearly one year later, in 1875, the surviving band members escaped imprisonment and returned home to northwestern Arizona. The annual La Paz Run memorializes these experiences by allowing Hualapai’s to retrace the steps of their ancestors from the point of internment northward to the Hualapai Reservation.”

In preparation for the run, the participants hear stories of La Paz through elders who recount them, and participate in ceremonies and traditions to commemorate the loss their people experienced at that time in history, sometimes with neighboring tribes. Just before the event itself, held in memory of Hualapai ancestors, the Colorado River Indian Tribes hosts dinner for the runners.

CRIT’s Manataba Messenger had a brief message on its Facebook page, welcoming the Hualapais and urging respectful observation of their ceremony as they pass through the area.