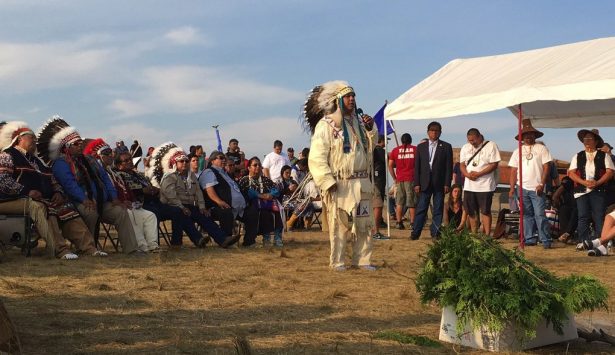 Members of the Colorado River Indian Tribes are headed to Cannon Ball, North Dakota to participate with other tribes from across the nation in a protest in opposition to the Dakota Access Pipeline.

CRIT is “choosing to stand in solidarity with the Standing Rock Sioux Tribe” in spiritual gatherings on the north side of their reservation, according to a statement by Tribal Vice-Chairman Keith Moses:

“The Tribal Council of CRIT has submitted a letter of support for the efforts of the Standing Rock Sioux Tribe in opposing the Dakota Access Pipeline. The Dakota Access Pipeline will cross the Missouri River at a location just several hundred feet north of the Standing Rock Sioux Tribe. The pipeline will carry up to 570,000 gallons of crude oil every day. The Missouri River, like our Colorado River, is the lifeblood for many Indian Nations in that region. A spill along the pipeline could result in devastating impacts on the river – a source of drinking water, agriculture, and recreation for millions of people – and sacred sites and cultural resources.”

More than 1,500 people from 150 tribes and their supporters from around the country have gathered at the confluence of the Cannonball and Missouri rivers in response to the federal action, prompting the company to temporarily halt construction on the pipeline. The tribe seeks an injunction from a federal judge — a ruling on which could come as soon as early September — to block further construction.

The Colorado River Indian Tribes has fought its own battles over federal energy projects on ancestral lands. The Genesis Solar Project near Blythe was given the federal go-ahead despite the discovery of Native American artifacts in the land, which the Tribes say is proof of an ancient village.

“When the federal government fails to live up to its consultation responsibilities with Tribes the damage can be irreversible and CRIT knows this all too well,” Moses said. “Just one solar project resulted in thousands of artifacts of CRIT ancestors being damaged and removed from their rightful location.”

A contingent of Mohave Elders and other CRIT members have been funded in their journey to the Dakotas by CRIT’s Tribal Council, which is using a portion of revenue generated from the monitoring program under the Tribal Historic Protection Office, which was set up to help preserve the Tribes’ footprint in its ancestral homelands surrounding the present day CRIT reservation.