Gary Zak says opponent Holly Irwin should have been at event, Irwin responds

La Paz County District 3 Supervisor candidate Gary “Zak” Zakrajsek thinks his opponent, incumbent Holly Irwin, should have been at last week’s Meet the Candidates event in Parker to debate him. Irwin says she was in Wenden, AZ at the time representing the County on an issue of vital importance – the water table – so she sent her daughter Berlynn to represent her on stage in Parker. 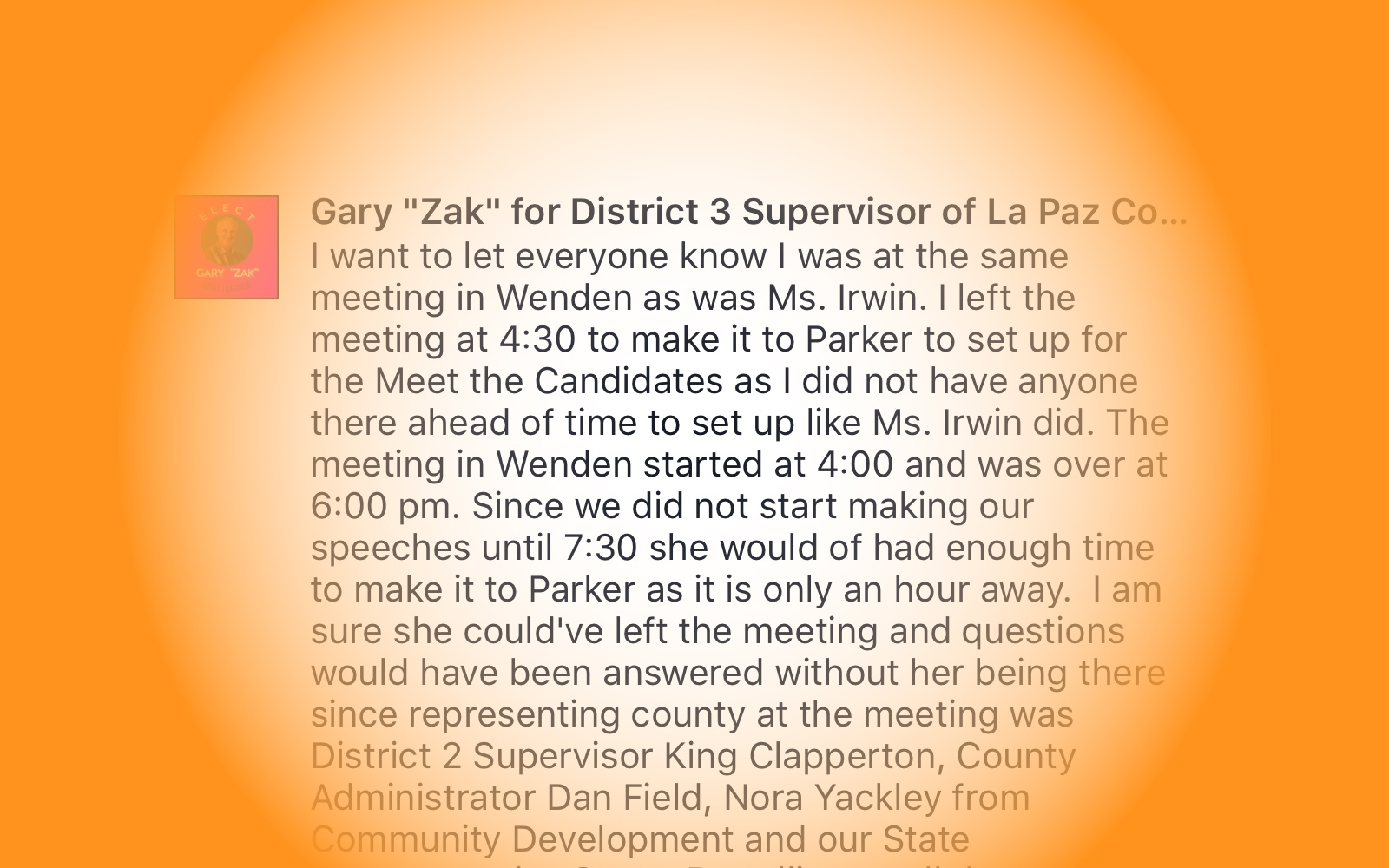 The Meet the Candidates event was held on Wednesday, October 5th at 6:15pm (and was covered HERE live – scroll to 7:32pm for District 3). The Arizona Department of Water Resources meeting in Wenden began at 4pm and was over at 6pm, according to Zak, who says he was at the same meeting and left at 4:30pm to get to Parker.

“Since we did not start making our speeches until 7:30pm she would have had enough time to make it to Parker as it is only an hour away,” he wrote on his campaign page on Facebook. “I am sure she could’ve left the meeting and questions would have been answered without her being there,” he said, saying that other County representatives were at the same meeting and could have answered questions for her.

Irwin sent a response to Parker Live today, saying that she believes the ADWR meeting was of prime importance, and adding that she wanted to be there afterwards to listen to the thoughts and concerns of taxpayers in the County.

“A year ago I brought attention to our water issues not only to my District but to our entire County,” Irwin said. “Arizona Department of Water Resources responded by making La Paz County the First priority planning area for the Governor’s Water Initiative for Strategic Planning when our County was not being considered at all.”

Irwin said she had seen Zak’s criticisms of her nonattendance at Meet the Candidates, but did not want to respond with negative remarks about him.

In her absence last Wednesday, with one daughter already on stage opposite Zak, Irwin’s second daughter Sherrie approached the microphone to reprimand Zak for his platform, saying it was “just a slam against my parents”.

Zak replied, “I’m sorry that I had to say these things about your parents but I’ve had to work with them and I’m frustrated.”

The full statements of both District 3 candidates on this issue are included below.

“I want to let everyone know I was at the same meeting in Wenden as was Ms. Irwin. I left the meeting at 4:30pm to make it to Parker to set up for the Meet the Candidates as I did not have anyone there ahead of time to set up like Ms. Irwin did. The meeting in Wenden started at 4pm and was over at 6pm. Since we did not start making our speeches until 7:30 she would have had enough time to make it to Parker as it is only an hour away. I am sure she could’ve left the meeting and questions would have been answered without her being there since representing County at the meeting was District 2 Supervisor King Clapperton, County Administrator Dan Field, Nora Yackley from Community Development and our State Representative Sonny Borrelli were all there to help answer questions from our residents. So with all these people there to answer questions and well enough time for Ms. Irwin to get to the Meet the Candidates night in Parker, you wonder why she left her daughters there alone to have them take on the responsibility to make a speech and campaign for her. Hmmm…”

“I would like to thank both of my daughters, Berlynn and Sherrie Irwin, for representing me at the Meet the Candidates held in Parker last Wednesday. I would also like to thank all of those who have called, emailed and texted me on what a wonderful job they both did.

A year ago I brought attention to our water issues not only to my District but to our entire County. Arizona Department of Water Resources responded by making La Paz County the First priority planning area for the Governor’s Water Initiative for Strategic Planning when our County was not being considered at all.

My responsibility and priority first and and foremost is to not only represent my constituency but the taxpayers of the entire County as this issue is critical to our future. I refuse to deviate from that when a job as a County Supervisor is to represent my District along with State and Legislative Representatives on tough issues such as this one.

Seven and a half years ago, the taxpayers entrusted me with the very important job of representing them as their County Supervisor for District 3. It was my responsibility to them to not only attend, but be available after the meeting Wednesday to hear their thoughts and concerns; that’s what being a Supervisor is all about.

I have seen the negative comments being put out by my opponent. I take pride in the fact that I have not posted one negative remark about any of the opponents I have faced, and I’m not about to start now.

I believe the people of La Paz deserve to be represented in a professional manner. I will continue to work with passion and dedication not only for the taxpayers of District 3 but for the entire County.

Thank you for your continued support.”