Inside the financial crisis at La Paz County

A cash shortage, outstanding accounts payable and a deficit of over $13 million: challenges mount for new Board of Supervisors as they get help to formulate a recovery plan 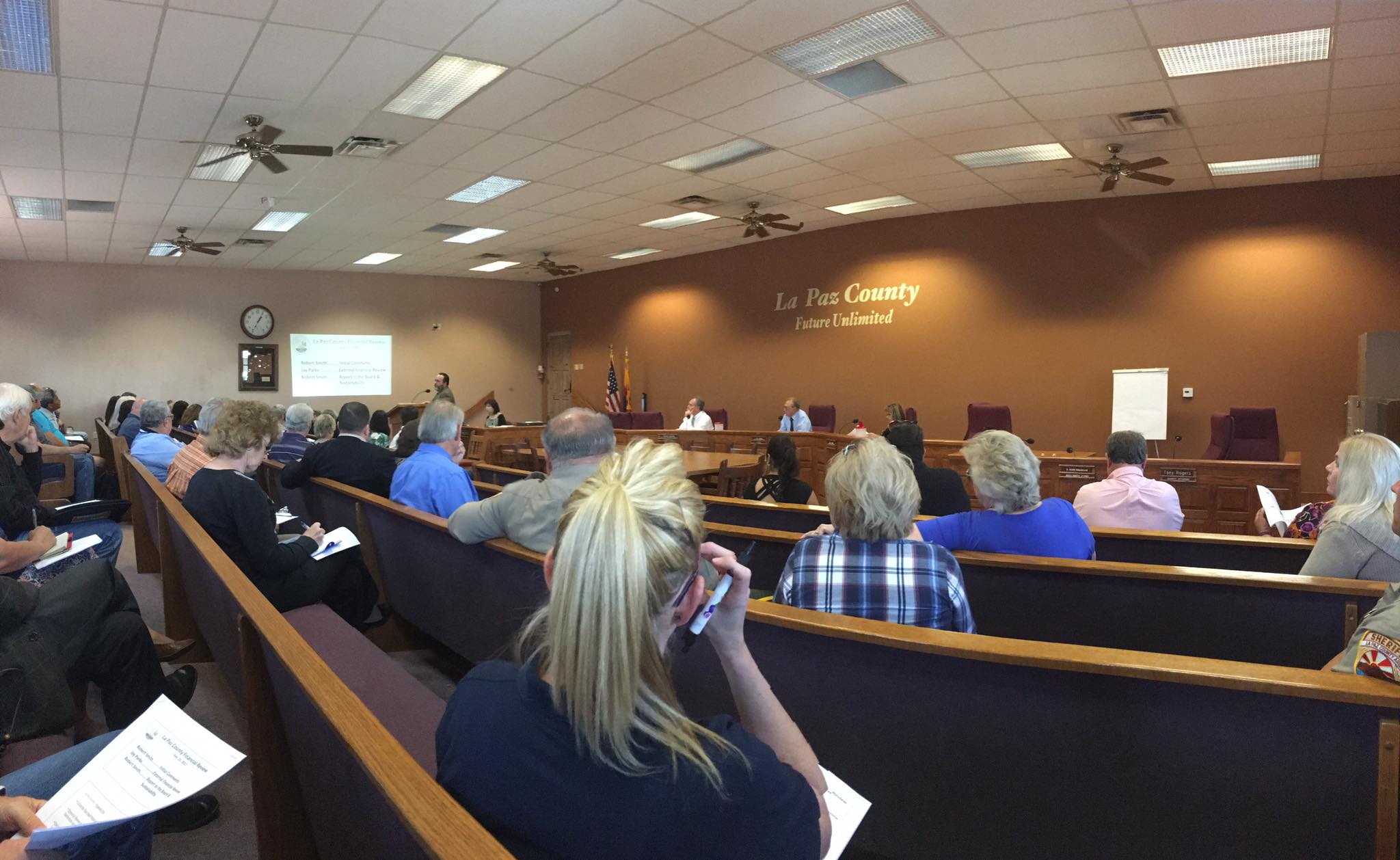 A new review has revealed a “financial crisis” at La Paz County. The findings were detailed in a well-attended public meeting on Tuesday that, for the first time in many years, put the County’s finances and accounts in full and graphic view.

Robert Smith, the Interim County Administrator hired since the election of Duce Minor to the Board, opened by saying that he had assembled a team to get an idea of how big the problem is and what would need to be done about it.

“We have a pretty good idea of what the number is that needs to be offset,” he told the boardroom.

Jay Parke, an auditor with the CPA firm Walker & Armstrong who has worked with the County before, then gave a full presentation that set out the financial situation in stark terms.

“What we’re saying is that there’s a real, immediate need to tackle some challenges that we have,” Parke said. “Some of these issues that we’re dealing with have actually been out there for many years.”

Although the County’s General Fund is running a positive cash balance above $4 million, it is more than canceled out by serious deficits in other funds, many of which the General Fund is ultimately responsible for covering. Because the County’s money is pooled together, some funds have been subsidizing others.

Many of the County’s Special Revenue Funds have been allowed to carry negative balances from year to year, leading to an accumulated current deficit total of around $6 million. Programs like the Monsoon Emergency Fund (-$861,589 ‘in the red’), the Rabies Control Fund (-$307,506) and the La Paz County Park (-$491,753) all have their own story to explain why they are running a negative balance, but all contribute to the hefty total.

Many programs are generally expected to run a deficit, and are expected to be covered by the General Fund, but money must be transferred from the General Fund to subsidize them. When the transfers don’t get made, sometimes for years in a row, the deficits in those programs continue to grow. The La Paz County Health Department is a good example of this, Parke said, because it is supposed to be covered by the General Fund but transfers have not been made, and it is currently running an accumulated deficit of $892,670. 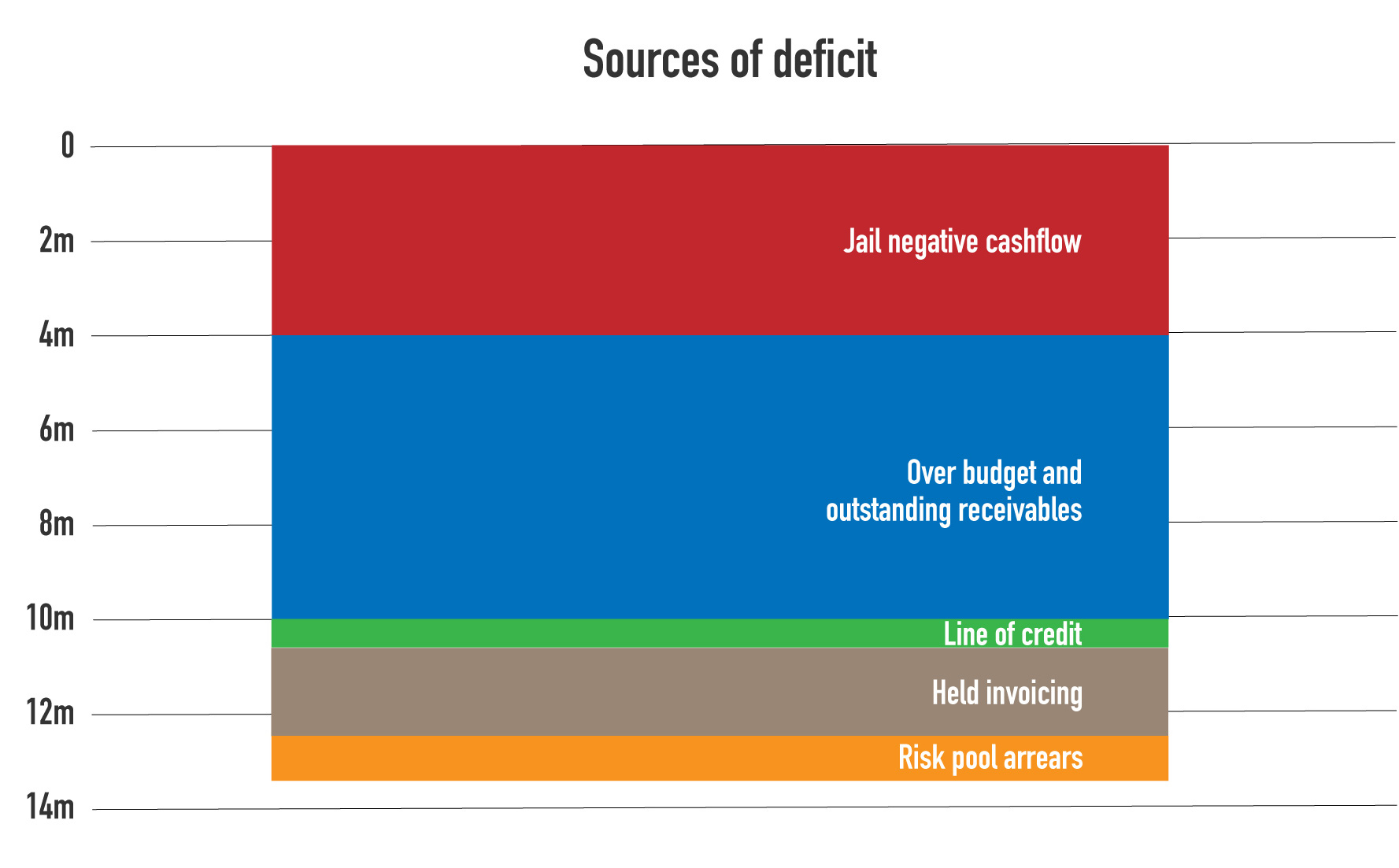 The General Fund must also cover the costs of programs that are grant-funded or reimbursed from other agencies while they are waiting for the money, something which Minor said should not be happening.

“We like to talk about grant money,” he said. “Well, where I come from, it’s not a grant until we get the money. If you get it approved and you spend the money, that’s General Fund expense until the money comes back. That has to be addressed.”

As an example of this, Parke says the Monsoon Emergency Fund should be reimbursed by the Arizona Department of Emergency Management.

A list of inactive Special Revenue Funds was also released, showing deficits that in some cases date back almost 13 years and total over $1.5 million, part of the $6 million.

The La Paz County Jail District was another big topic, which is currently running a separate negative balance of over $4 million. 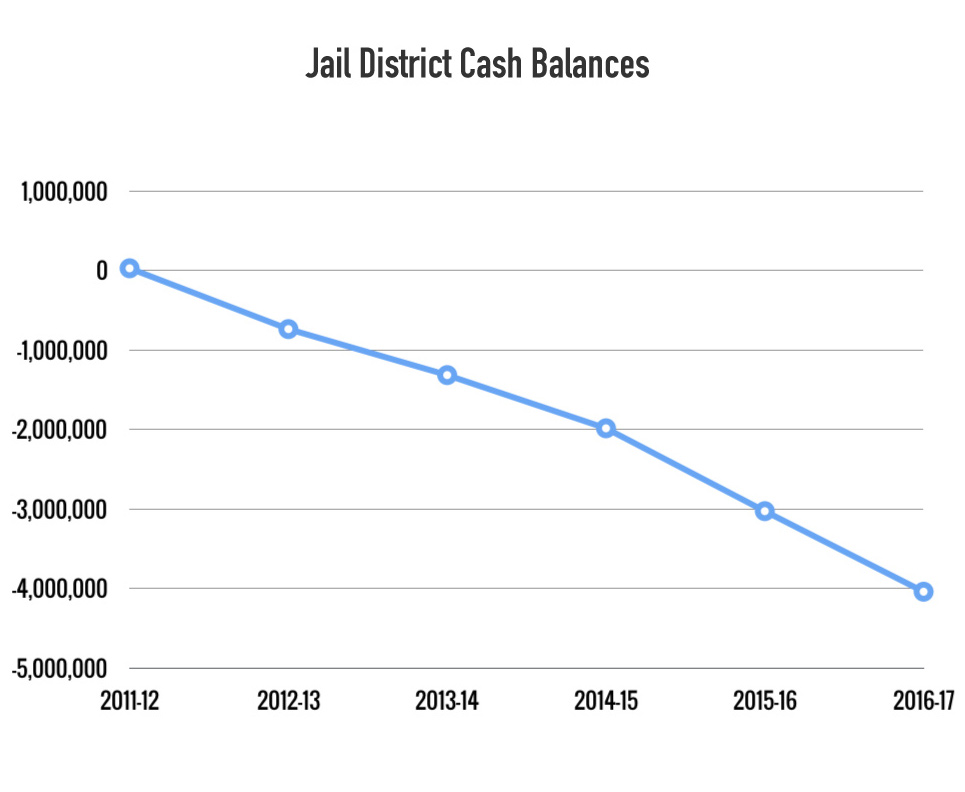 The most oft-cited reason for the jail’s deficit, which has accumulated since 2012, is that the federal government, which historically pays the County to take federal inmates, has not been sending inmates to La Paz County, so the costs of running the jail are falling on the County itself significantly more than it did in the past.

Parke also drew attention to the fact that the County has been using its line of credit to pay its bills for the first time.

“The County has a $1 million line of credit, and starting in 2015 the County started using that line of credit,” he said. “So what that means is we are basically borrowing money to meet payroll and pay vendors and basically pay our bills. [In 2017] we continue to use that line of credit and currently we have outstanding accounts payable as well as a fairly substantial balance.” That balance is reportedly around $500,000. 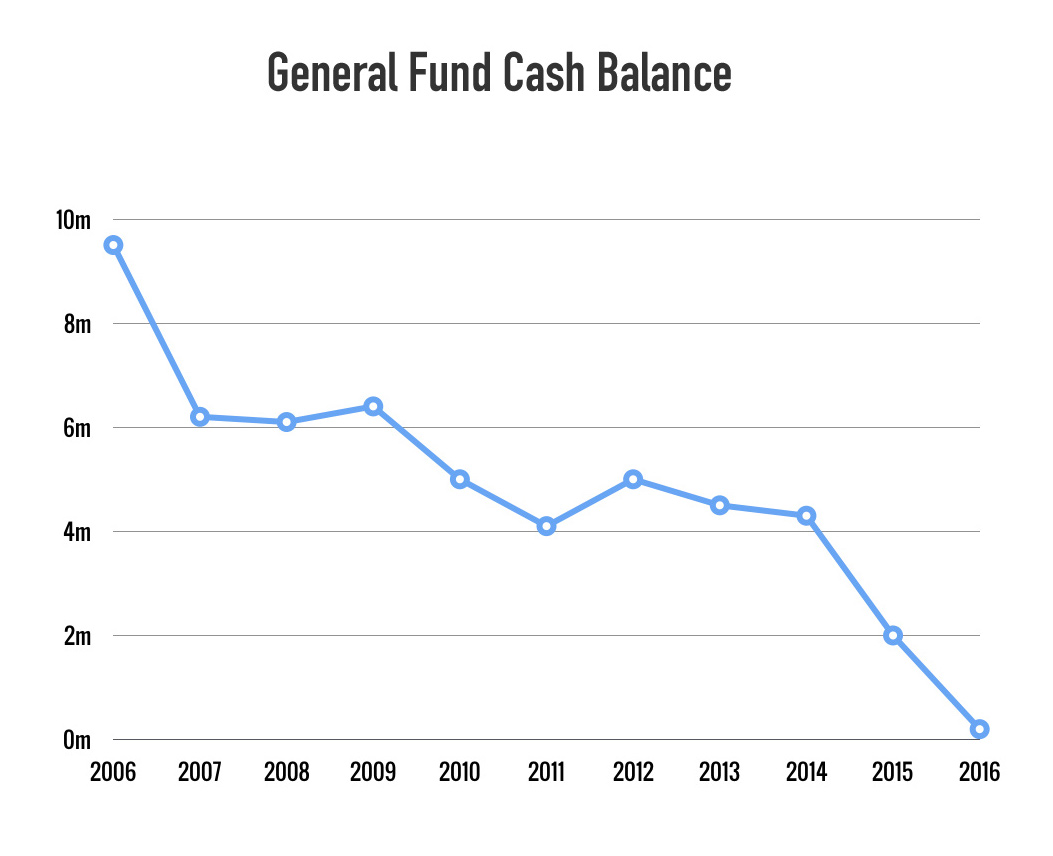 Minor ran on a platform of transparency and fiscal responsibility, saying repeatedly during his 2016 campaign that the County’s finances were in trouble. He also vowed to vote to remove Dan Field as County Administrator, who then stepped down after the election in December and has now been replaced on an interim basis by Smith.

Minor now joins incumbents on the Board D.L. Wilson and Holly Irwin, who came in for some criticism on Tuesday for allowing the financial crisis to escalate.

County Assessor Anna Camacho said she was very upset as a taxpayer. “I’m sorry I’m going to put this on you but remember this, you guys are also responsible,” she told the Board. “Maybe not [Minor], you weren’t here, you’re a newbie. But you guys are responsible. You are supposed to be watching.”

Irwin, who as a third-term Supervisor has been on the Board the longest, responded: “I’d like to intervene here because Robert, I do appreciate what you’ve done in the short amount of time, I’m sorry we didn’t have that for all of you in the past, however, I’m hoping that we can continue to move that forward, that way you do see what’s going on. There’s certain things I was just made aware of myself, so I’m just letting you know. You can shake your head all you want, that’s a fact. Okay?”

D.L. Wilson also responded to the criticism. “I understand what you’re saying,” he said. “I’ve been here 4 years. Frankly I’m embarrassed that we’re in this condition. So I’ll accept my part of that responsibility. I think we have a great team here. I have faith that this team will work together to resolve the issue. We’ll be looking for any and every idea that you can come up with.”

“There are other failures that put us here,” Smith said. “It’s not just a money problem. We do have to fix the financial problem, but there’s underlying managerial and performance processes that we need to tune up.”

He went on to say that the County has some “organizational dysfunction” that he believes are the cause of the financial problems as a symptom of a bigger need for change. Personnel policy, regulatory issues, process and reporting and investments in Information Technology were all mentioned as being in need of repair or overhaul, together representing what would be essentially a fundamental makeover for the County as an entity.

By March, Parke said there would be a detailed written recovery plan detailing the solutions available to the County, which he said would represent “a lot of work” for the County.

Smith’s estimate is that the County needs to save $5.3 million per year for 5 years to break even and create appropriate reserves. He admitted that this is a significant jump, but said he thought it was necessary.

Meetings with departments were being scheduled immediately, with some departments reportedly meeting this week about what can be cut from their budgets. Other possibilities mentioned include revenue bonds by increasing the jail excise tax, selling County real estate assets and leasing them back to generate cash, or borrowing money from the bank. In addition, recently elected Sheriff Bill Risen said his office is diligently looking at the potential of getting federal inmates back to the jail again.