30 employees laid off at La Paz County, more may come

Emotions were high at La Paz County when approximately 30 employees were laid off after the Board of Supervisors voted to reduce the County’s workforce with immediate effect. The cuts came in response to an ongoing financial crisis, which the Supervisors have been publicly addressing since their new term began in January. 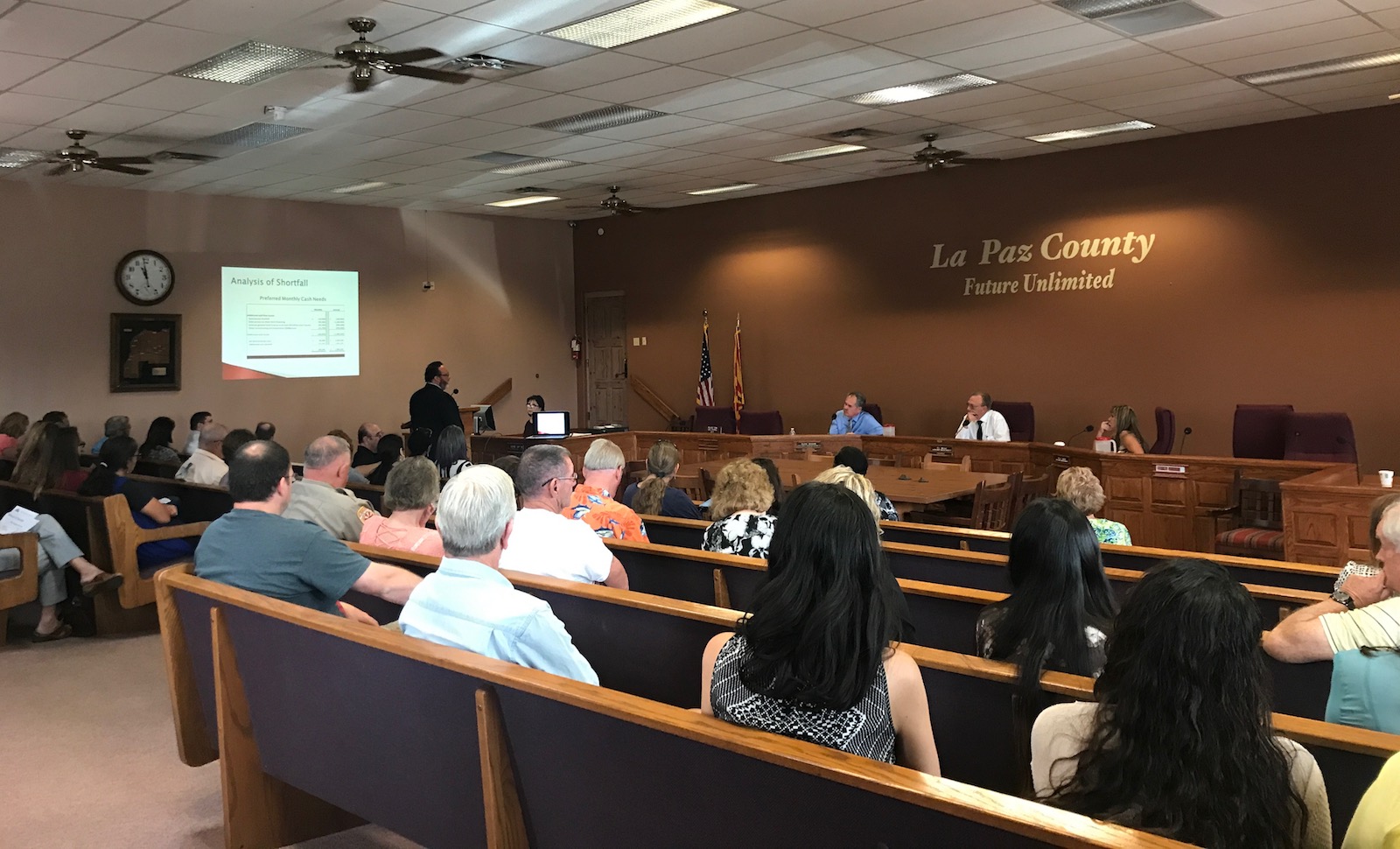 “This is the horrible day we’ve all known was coming. It’s brutal,” said Supervisor Duce Minor at the special meeting Monday. “They are big numbers because we have a big problem. We can’t kick the can down the road anymore. It’s got to be addressed.”

In a 2 to 1 vote, the Supervisors agreed to a monthly amount of $133,683 to be cut from the County’s monthly operating budget, around $1.6 million per year. Supervisors Minor and D.L. Wilson voted for the motion, with Supervisor Holly Irwin voting against.

$64,711 of the cuts will come from a direct Reduction-in-Force (RIF) by the County administration headed up by Interim County Administrator Robert Smith working with Human Resources Director Mary Frantz. They used a scoring system to determine which positions were mandated, which ones could be absorbed by others in the same department, which ones may be duplicated in function, and other considerations. Then, department heads were informed of which positions were being cut.

According to the reports, 13 of those positions cut were full-time, 17 were part-time.

The other $68,972 will come out of the monthly budgets for departments run by elected officials such as the Assessor, Recorder, Treasurer, County Attorney, Sheriff and Justices of the Peace. Those elected officials will be responsible for deciding how to make the cuts within their departments, which means that more layoffs may be coming.

“I agree with Duce that we’ve come to a point where we must make a decision,” said Wilson. “There are too many things that we need to happen that are contingent on improving the financial condition of the County today.”

The County should have at least 100 times its current cash balance in order to have 25 percent of operating expenditures in reserve, according to a presentation by Smith.

Irwin said she did not feel comfortable voting for the RIF while not having all the information she wanted. This included some confusion over whether grant-funded positions were likely to be among the cuts and whether the scoring reflected that. The answer wasn’t a simple one, with Finance Director Ken McFarland saying there “wasn’t enough time” to determine whether or not it would affect grants to the County because of “bad book-keeping”.

But despite some uncertainty on some of those open questions, the necessity of taking tough action was compelling for two out of the three supervisors. There was a terse exchange between Minor and Irwin when Irwin said she was concerned about the prospect of losing employees.

“I’m reluctant to vote for this when I don’t have accurate information,” she said. “These numbers have been all over the place for two months, and that concerns me, especially when you’re talking about cutting people.”

“Well, I’m not going to allow you to play the angel of the employees today,” Minor shot back.

“You know what?-” Irwin began to respond.

Minor: “We have a decision to make today that is going to be very difficult-”

Irwin interrupting: “Sorry that I care about the people that work for us, my bad.”

Minor, slowly: “And you are not the only one who cares about the employees.”

Emotions continued to be high during the rest of Monday after the decision as the County’s administration met with individuals who were told they were being laid off.

“My heart is breaking,” said Vivian Hartless, the County Fiduciary. “They cut my one position, leaving me to run my office alone. It’s absolutely impossible, the ones who are going to suffer are the elderly and vulnerable in our community who my office serves. I help demented, homeless veterans and deceased that have no family that are willing or able to to take care of their loved ones. I just think it’s ludicrous to think that I can run this department by myself.”

Hartless said she isn’t sure what to do now, but says she knows that she cannot run her office alone with her current caseload. Third parties have contacted Parker Live to say that Hartless’s assistant was a “great employee” and a necessary position at the County, which has an obligation to provide fiduciary services including the indigent burial program.

Two elected officials who had the biggest cuts by dollar amount were the County Attorney’s office and the Sheriff’s Department. Sheriff Bill Risen told Parker Live he didn’t know what the effect would be on his department yet.

“This is a terrible time for the County of La Paz,” Risen told us. “The impact will be seen over the coming months. Families with reduced incomes. This will impact the whole county, and the towns as well. I do not know what the overall impact to the Sheriff’s Department will be. We are mandated to provide services and we will provide as many services as possible to our residents. The Sheriff’s Department employees are dedicated to this county and they will work their hardest for each and every one of you. La Paz residents are resilient and we will make it through this tough time.”

County Assessor Anna Camacho says she has some immediate concerns about the cuts to her office, and cites an International Association of Assessing Officers (IAAO) report which shows that her office is already overextended.

“In the past there were seven appraisers in the Assessor’s office,” she told Parker Live. “Currently, there are five appraisers in the office. I have been very vocal about my concerns with the staffing levels in the Assessor’s office. Having to make additional cuts to the Assessor’s office is going to impact the county like never before. I inherited a large number unfinished tasks as well as a backlog of permits that had not been worked from the previous administration, that add up to significant revenues, not being able to assess and list on the tax roll, due to the lack of staff which has been extremely disappointing.”

The IAAO paper says an effective assessment system requires one full-time employee per 1,500 to 3,500 parcels, with smaller jurisdictions like La Paz needing more staff relative to the number of parcels than larger jurisdictions.

“Based on our records, there are 17,595 parcels in La Paz County,” Camacho said. “In addition, there are 4,280 personal property accounts (consisting of 3,490 mobile home accounts and 790 business accounts) that my staff must work. These numbers show that our office is already understaffed and in need of additional appraisers. We have provided this information to the HR Director, Acting County Manager, and the Board of Supervisors.”

As far as how she thought having 5 or less appraisers would affect the taxpayers of La Paz County, Camacho said her office would do its best to serve the public, and added an apology:

“I would like to personally apologize to property owners in La Paz County who have been waiting for us to conduct field reviews, ownership transfers, splits, combines, etc. We will continue to be supportive and if you should have any questions or concerns please do not hesitate to give our office a call or stop by and talk to us in person.”

There is some uncertainty at this hour as to the exact dollar amounts each elected officials’ department is being cut, with some elected officials on Tuesday saying they were not certain how this will affect their services.

County Attorney Tony Rogers, whose office was listed for the second-highest cuts by dollar amount, said he would make the cuts necessary. “The recently announced budget cuts are painful but necessary. The County Attorney Office will do its part to help ‘right the ship.'”

Elected officials reportedly have until Monday to tell the Board how they plan to reduce their budgets.