C-SPAN: WATCH THE BILL ON THE HOUSE FLOOR HERE.

A big bill for La Paz County passed the U.S. House of Representatives Monday, with the support of several members of Congress and the Colorado River Indian Tribes. The bill, known as H.R. 2630, the ‘La Paz County Land Conveyance Act’, would transfer 8,800 acres of federal land to the County for commercial development, according to a statement from Congressman Paul Gosar, who championed the bill on Capitol Hill. 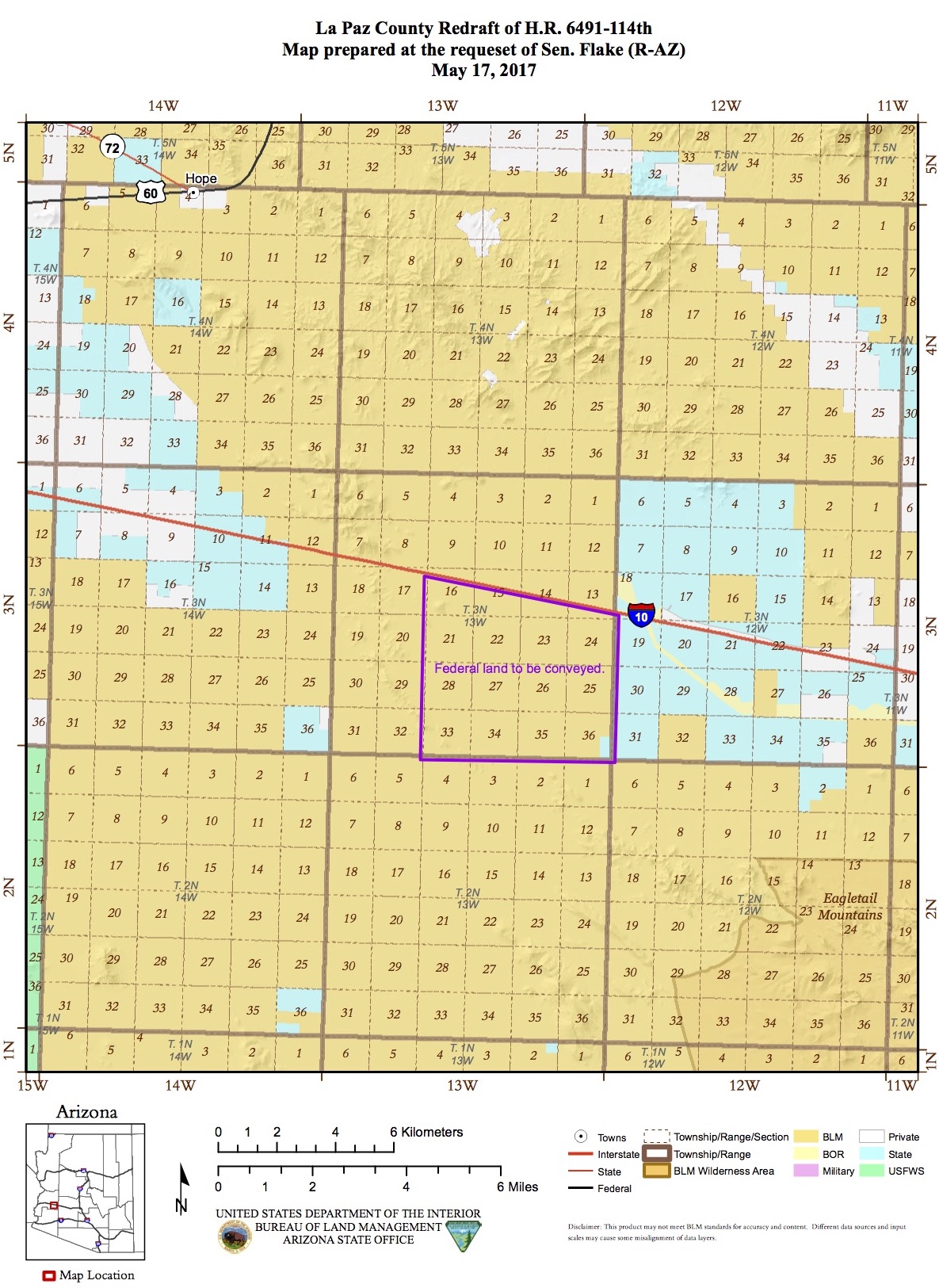 “I am thrilled to see the House pass this bipartisan jobs bill that embraces a true all-of-the-above energy strategy. This locally-driven solution will allow for future economic prosperity in a county where new opportunities are few and far between due to the abnormally small presence of private land. This legislation is good for the County and allows La Paz to generate new revenues in order to fund important services like education, transportation and law enforcement. H.R. 2630 is good for federal taxpayers and is projected to bring in at least six million dollars. Finally, the renewable solar energy generated as a result of this bill will assist with ensuring a balanced portfolio and will provide power to help meet the electricity demands of the West. I am grateful for the close collaboration among La Paz County officials, tribal governments, legislators on both sides of the aisle and other local stakeholders. I urge the Senate to pass this important legislation, that utilizes a bottom-up approach, in an expeditious manner.” – Congressman Paul Gosar

Speaking on KLPZ 1380am Tuesday morning, County District 2 Supervisor Duce Minor said that the bill “would change the face of La Paz County for decades to come,” because it would make the land available for commercial purposes which will contribute significantly to the County’s tax rolls.

Just 6 percent of La Paz County is privately owned, with a massive federal footprint over most of the region controlled by the Bureau of Land Management (BLM), part of the U.S. Department of the Interior. The problem for La Paz, the second-youngest county in the nation, is that it makes 94 percent of the land unavailable for uses that would generate tax revenue, severely crippling its ability to provide services for citizens comparable to most other jurisdictions.

“The Board of Supervisors wishes to thank Congressman Gosar, the bill’s cosponsors and other members of the delegation for their leadership to promote jobs and economic development in La Paz County. H.R. 2630 will help implement our vision to attract new industry, especially solar development to this strategic location to diversify our local economy, create quality jobs and increase the tax base so our rural County can adequately meet the growing needs of all our citizens.” – District 2 Supervisor Duce Minor

The idea behind the bill is to take 8,800 acres of BLM land next to I-10 in a remote, eastern part of the County and let La Paz County purchase it for development to include electricity generation. Utilities have been expanding renewable energy production in the last several years to meet the needs of a growing southwest.

The land is “right under the proposed path of the proposed Ten West Link,” Minor told Parker Live, a proposed $300 million electrical transmission line that would transmit power – especially renewable power – between southeast California and southwest Arizona. This creates opportunities for electricity providers. “You can make all the power you want, but if you can’t get it onto the grid, it’s no good,” Minor added.

Crucially, the land is designated as ‘disturbed ground’, meaning that it is not in a native state and therefore development creates minimal impact on the environment. This in turn allowed the bill to garner the support of the Colorado River Indian Tribes, which has been asserting the importance of proper handling of tribal artifacts discovered in recent years at utility-scale solar projects. Tribal Chairman Dennis Patch said this project represented “good policy.”

“Since time immemorial, the Mohave people have lived in what is now La Paz County, and our history is buried beneath the sands and in the rocks. It is time for federal policy to recognize the history of Native people, not try to erase it. Through this legislation, CRIT and our partners in La Paz County will start to turn the page by ensuring that tribal artifacts found while developing this land are reburied on-site, as called for by our culture. We commend Congressman Gosar for championing this bill and helping forge our partnership with La Paz County. We also want to thank Congresswoman Sinema, and the bill’s other cosponsors, for putting good policy ahead of politics and supporting this common sense, non-partisan bill.” – CRIT Chairman Dennis Patch

The legislation requires the County to pay fair-market value for the land, which will be determined by appraisal, but the Congressional Budget Office has estimated the value of the transfer at $6 million. The County will have 20 years to make the purchase. In February 2017, the County issued a Request for Proposals (RFP) to renewable energy partners who would use the site for photovoltaic solar energy production, a process which continues now through various stages of development.

Supervisor D.L. Wilson addressed the House Committee on Natural Resources last October, telling the committee that “the County needs economic diversification to provide higher paying jobs and a tax base to allow us to provide services to our vulnerable populations.”

Congresswoman Kyrsten Sinema joined Gosar, along with Andy Biggs and Trent Franks, to cosponsor the bill.

“Arizonans want our leaders to come together to deliver solutions to local challenges—and that’s exactly what this bill does. I’m proud to work across the aisle with Congressmen Gosar and Biggs to push through Washington gridlock and help bring good-paying jobs to families in La Paz County, and more affordable, renewable energy to Arizona.” – Congresswoman Kyrsten Sinema

“The La Paz County Land Conveyance Act is critical to Arizona and for energy development in the state. This bill will lead to new jobs and economic growth in the region,” said Congresswoman McSally. “When Supervisor Wilson contacted me about this legislation, I reached out to, and worked with, Republican Leadership to bring this bill to the Floor for a vote. I was pleased to see this legislation pass yesterday.” – Congresswoman Martha McSally

The U.S. Senate will hear the bill next, with support from Arizona Senator Jeff Flake.