The triple murder trial of Kitage Lynch has been dismissed after the judge ruled that prosecutors were “playing games” with the rules “rather than actually properly preparing [the] case for trial.” 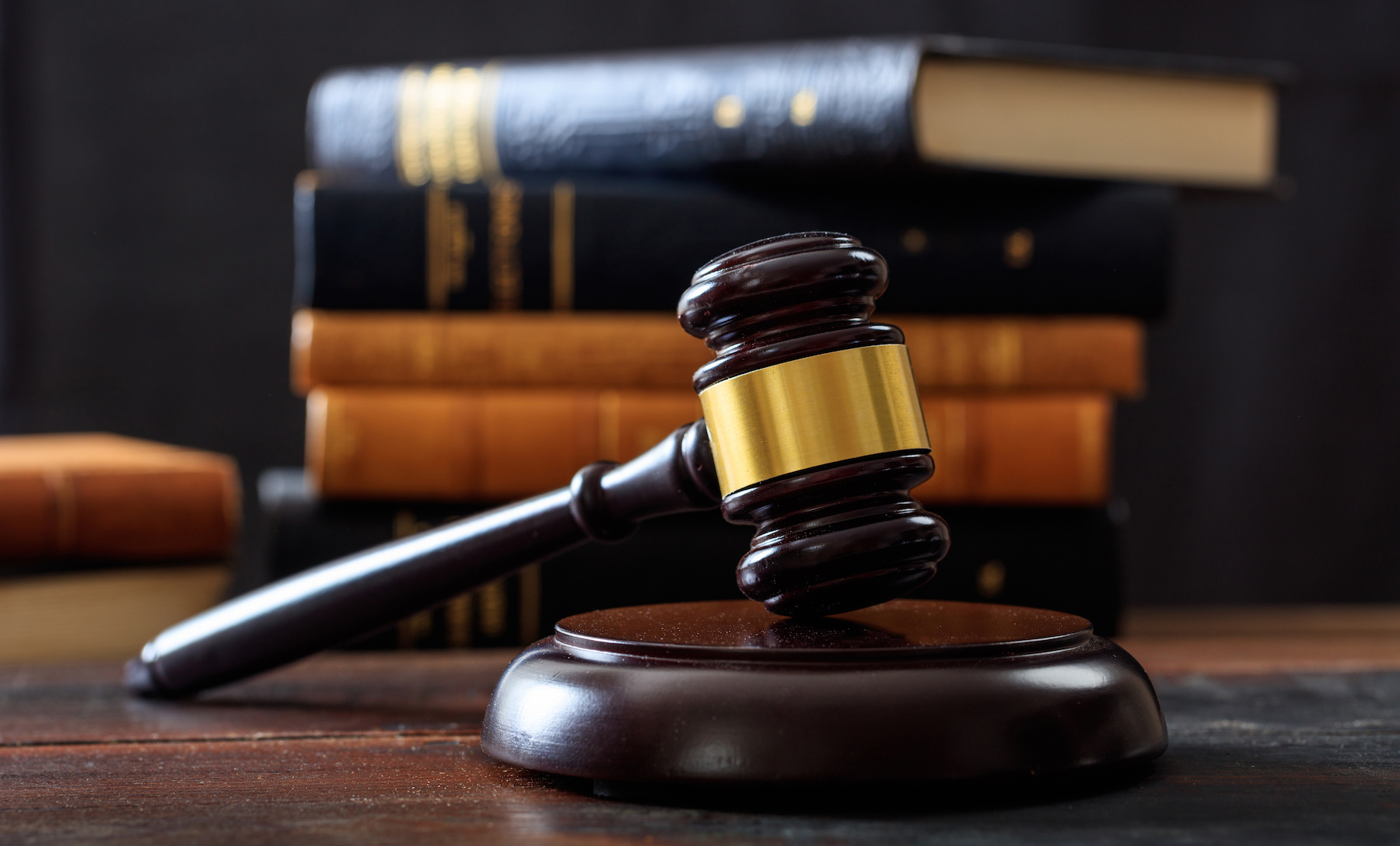 Parker Live has been following developments in the case since the killings near Salome, AZ in April 2016. Three elderly winter visitors were found dead, and Lynch was quickly named a person of interest and then a suspect.

After a conviction for other charges in Maricopa County, Lynch was sentenced to 15 years in the Department of Corrections in Yuma. He’d begun serving that sentence when last month he was transported to Parker to face trial for the three murders in La Paz County.

But on Friday, Judge Matthew Newman ordered the Sheriff’s Department to send Lynch back to Yuma, dismissing his lawyer and the case against him in La Paz County for now, and chastising the prosecutor, Deputy County Attorney Karen Hobbs, for not being ready to bring the case to trial.

In reference to Hobbs’ motion to designate the case as “extraordinary” and to grant an exemption to speedy trial rules, Newman wrote, “At that hearing, it became apparent to the Court that the State had done very little to actually prepare the case for trial since obtaining the indictment over a year ago, and denied the State’s motion.”

Newman’s suggestion was that Hobbs simply dismiss the case, take the time to prepare it while Lynch was serving his 15 years in Yuma, and then re-file the case when ready. But, Newman’s order says, “in a complete turn of events [the State] says it will be ready for trial within the time limits.” The order continues:

“The state does not mention how its’ 81 witnesses can possibly be ready for trial by October 15, 2018, a short 41 days from its’ request for trial, much less how the defense is supposed to be even remotely ready as it will have to react to each fresh disclosure as it comes out in a piecemeal fashion.”

“It appears obvious to this court that the state is more interested in playing games with the speedy trial rules than actually properly preparing its’ case for trial. By suggesting a truncated presentation of the evidence in its’ possession, the rights of the victims and their families are put in serious jeopardy. Moreover, the rights of Mr. Lynch to fairly confront the evidence against him and prepare his case for trial will suffer if he is somehow supposed to prepare his case ‘on the fly’. The state has already admitted in open court that they are not even close to being ready to present their case.”

Newman finishes by saying that his court “will not sit by idly while unprepared attorneys try to rush a case to trial because they don’t want to admit that they are unprepared.”

His ruling then orders the defense attorneys dismissed, the next hearings vacated and the Sheriff to transport Lynch back to Yuma to serve his sentence.

The case can be re-filed at any time.

The entire order is included below. 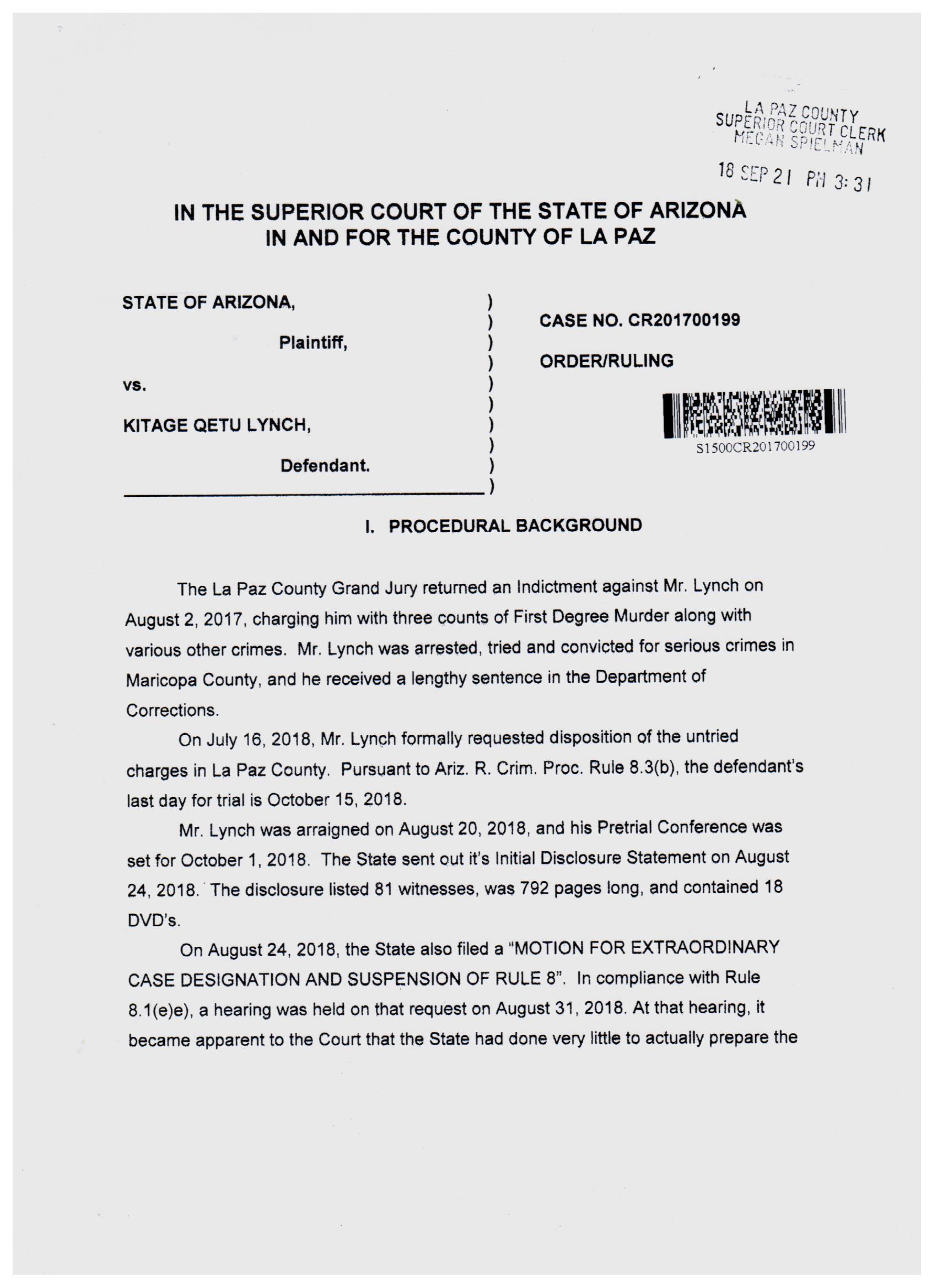 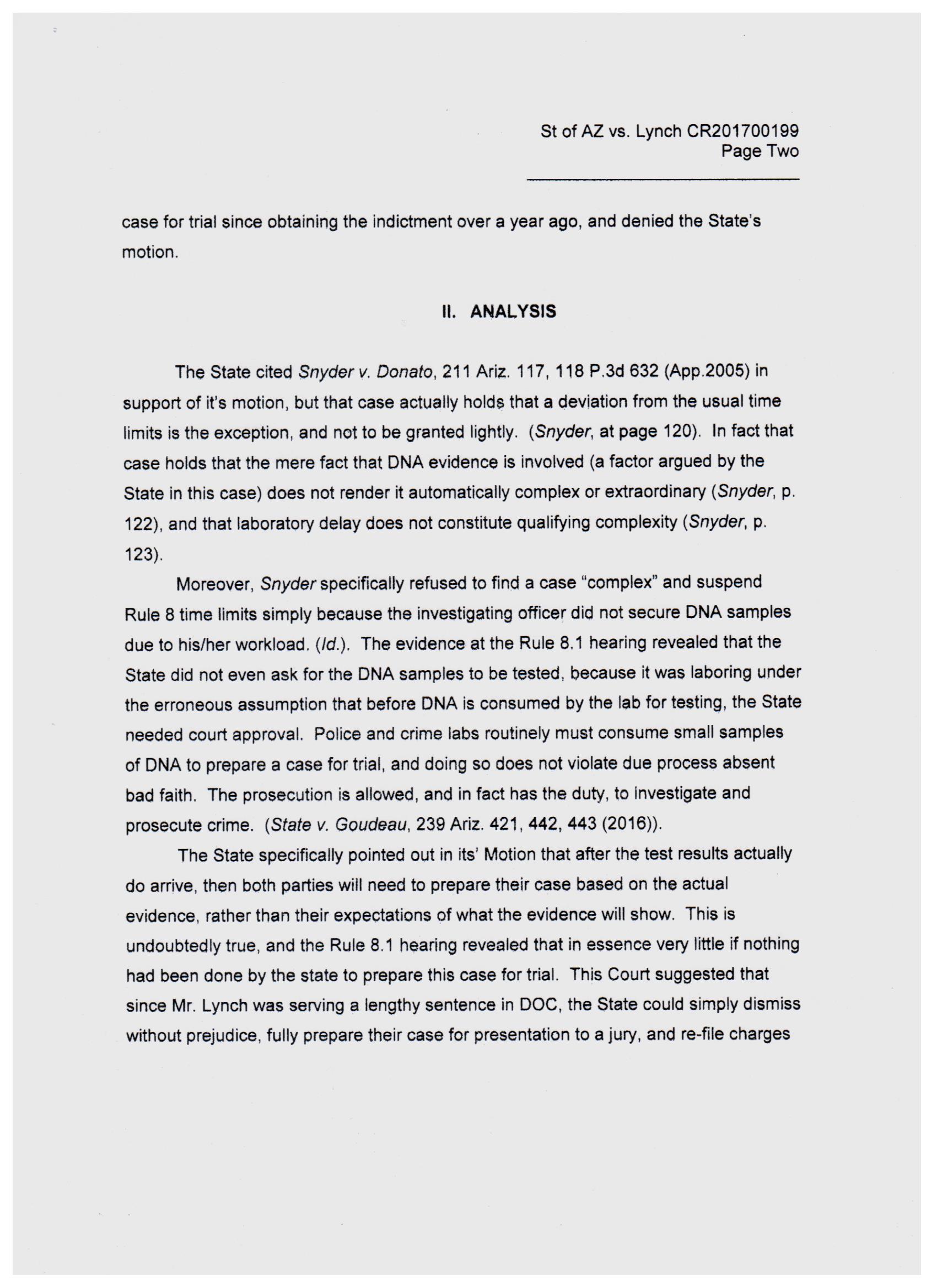 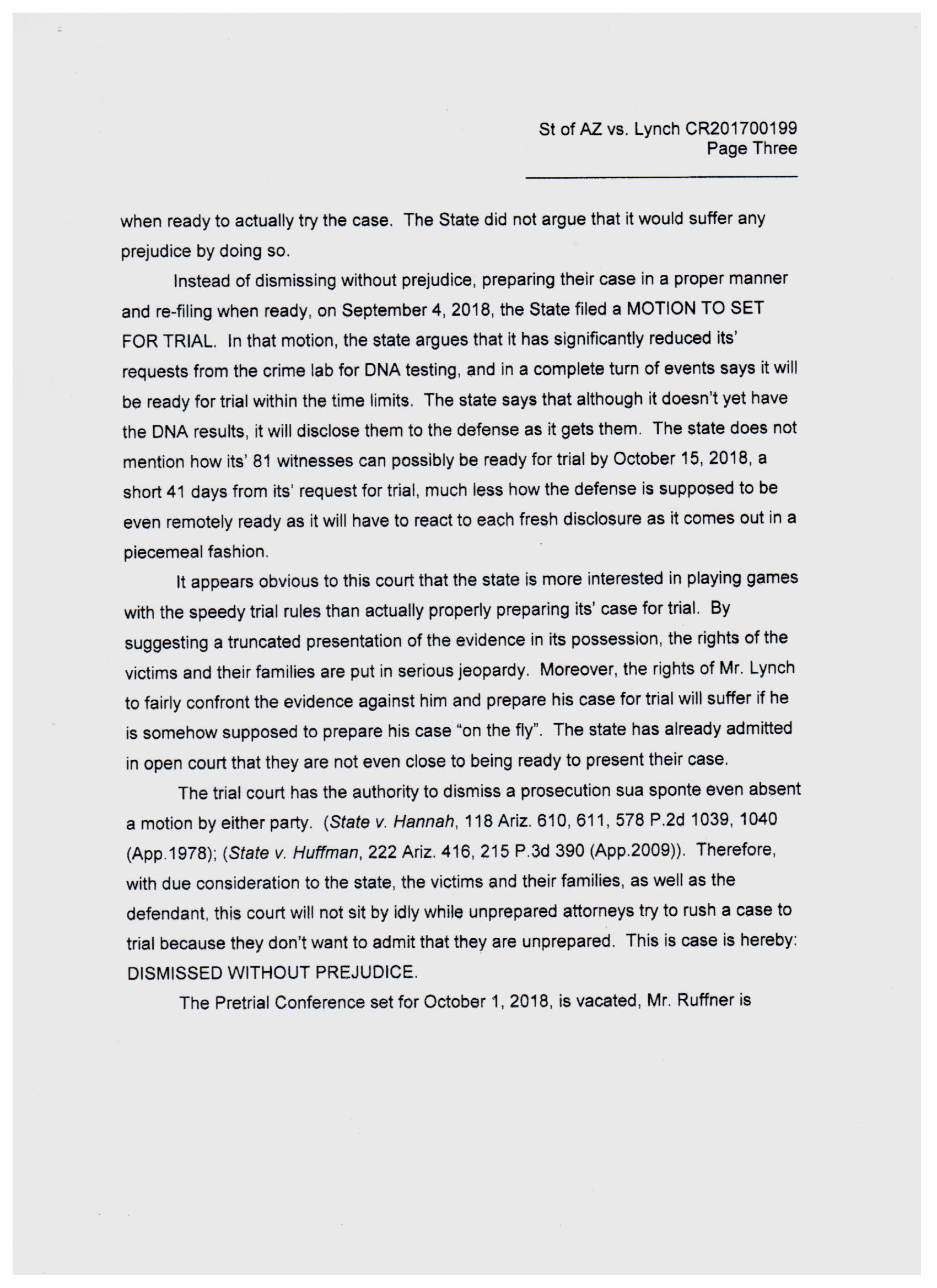 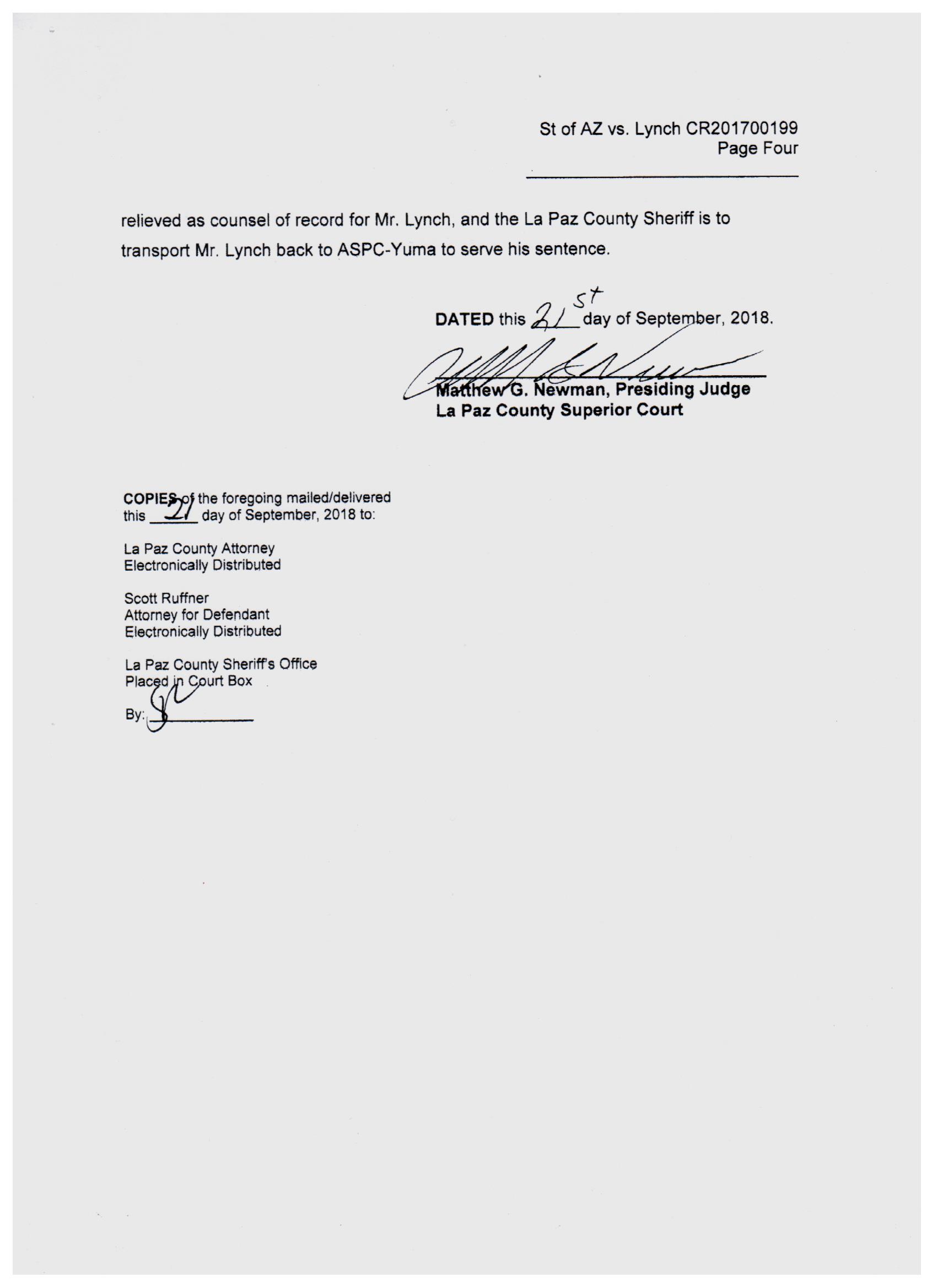