Parker councilwoman-elect Erica Daniels was threatened in a letter delivered anonymously to her door. The author threatened to turn her into the Arizona Attorney General’s Office for living at an address that is different to the address on the documents she used to run for office if she doesn’t resign. 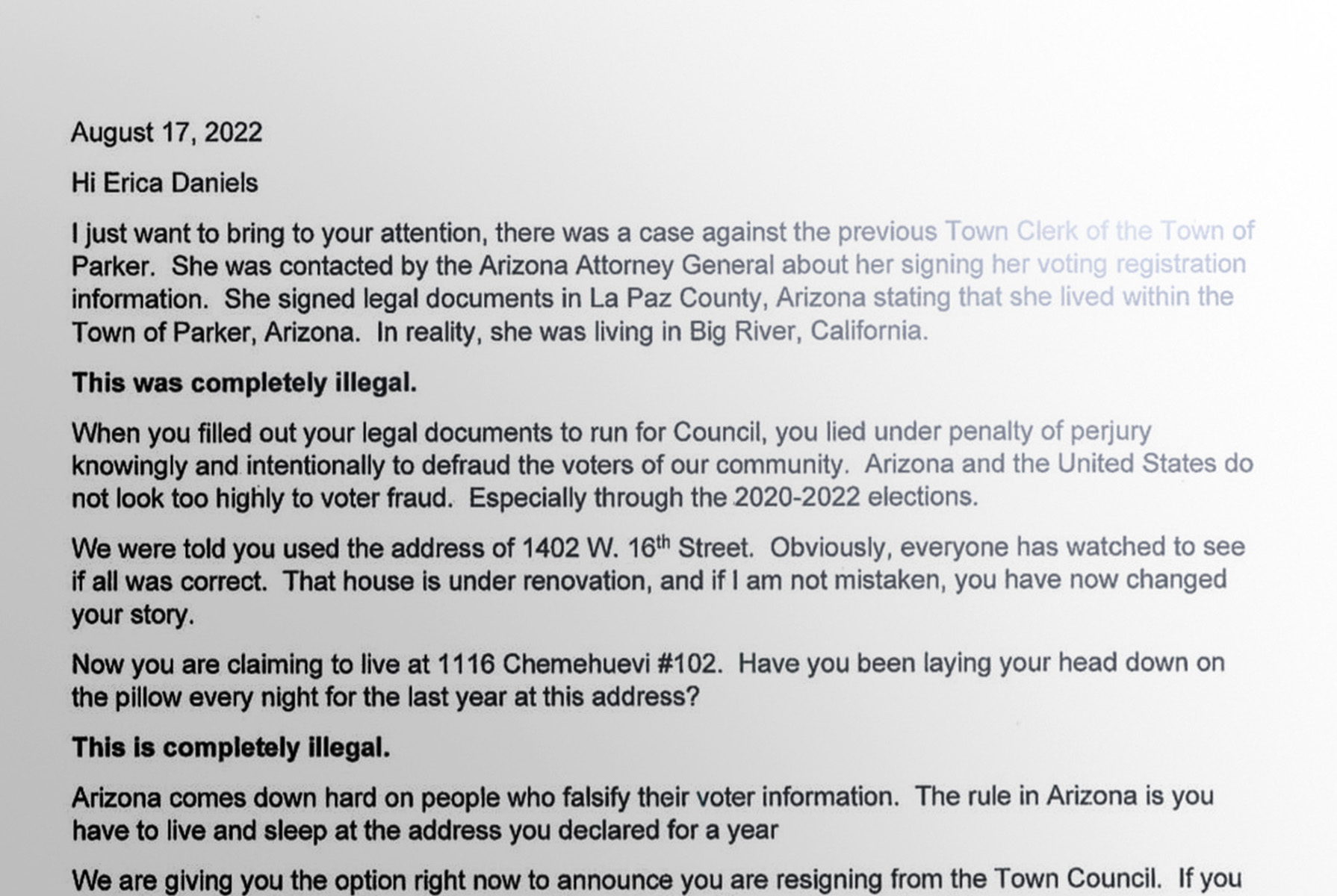 The letter reads, in part: “When you filed out your legal documents to run for Council, you lied under penalty of perjury knowingly and intentionally to defraud the voters of our community. […] We were told you used the address of 1402 W. 16th Street. Obviously, everyone has watched to see if all was correct. That house is under renovation, and if I am not mistaken, you have now changed your story. Now you are claiming to live at 1116 Chemehuevi #102. Have you been laying your head down on the pillow every night for the last year at this address? This is completely illegal. […] We are giving you the option right now to announce you are resigning from the Town Council. If you do not, all of this information will be turned over to the Attorney General’s Office.”

Daniels, who was elected in the Arizona primary earlier this month, said she will not be resigning as the letter suggests, calling it “wholly inaccurate.”

“My permanent address is, in fact, 1402 W 16th Street,” Daniels said. “Unfortunately, the entire home has had to be renovated due to a flood. While this process has taken some time due to insurance company requesting additional documentation. During the restoration, my family had to rent an apartment in the town of Parker until the entire house is back in living condition. I live in the town of Parker. I will not be resigning from the Town Council. I was elected to the Town Council and am proud to represent the residents of the Town of Parker.”

Daniels said she has distributed the anonymous letter and spoken with the Town Clerk, Chief of Police and current council members about it. She said she has filed a police report against the author of the letter and said she surmises that the author or authors “don’t believe in being accountable and have a hidden agenda for the Town of Parker.”

On his Facebook page, councilman Randy Hartless called the authors of the letter “cowards”, adding, “Good for her for taking a stand and not bending to the shenanigans of these people who THINK they’re running the town.”