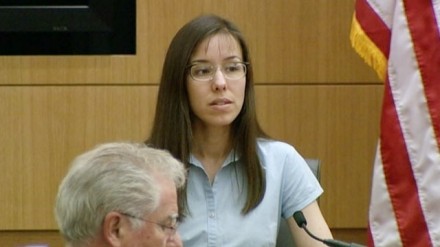 The biggest court story in the nation focused on La Paz County this week as a defendant charged with the murder of her boyfriend takes the stand to tell the story of their relationship.

Jodi Arias, charged with brutally murdering Travis Alexander at his home, told the jury that they would meet at a motel in the town of Ehrenberg. Arias lived in Palm Desert, CA while Alexander lived in Mesa, AZ, so Ehrenberg was in-between.

Upon being asked by Arias’ attorney what they did in Ehrenberg when they woke up the next morning, Arias replied that the town “isn’t exactly a tourist destination” and they weren’t able to find much to do while there. She said they went to see a movie in Blythe that afternoon:

“We were trying to find something to do and the town of Blythe is near Ehrenberg and there’s a small movie theater there so we saw a movie.”

After the movie, Arias says the couple went to eat at Sizzler before returning to the motel across the river in Ehrenberg. Other than sexual activities, she added, “If we weren’t in Blythe we were watching TV.”

The trial is currently the focus of primetime news shows and court TV, with Dr. Drew, Nancy Grace and others covering the courtroom drama in detail every night. Now in its 15th day, the trial continues with the soft-spoken Arias on the stand, giving her side of the story. Her defense is that Alexander got violent with her and she killed him in self-defense during a visit to his home in Mesa.