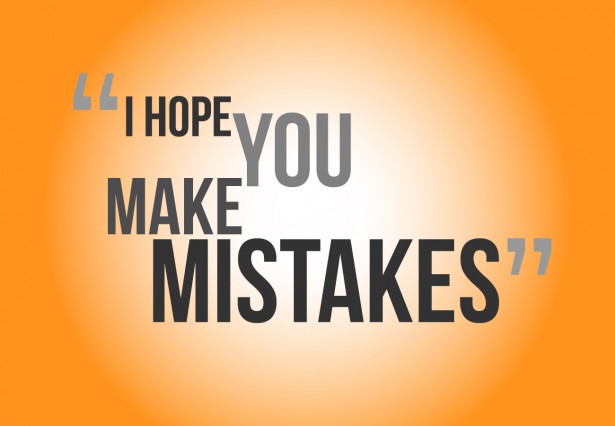 So it’s another new year and it seems like I’ve seen quite a few of them actually. Given what always happens every year I thought this might be a good starting place for 2016:

In case you don’t know Neil Gaiman is a very well-known author of science fiction, comic books, etc. What he said isn’t exactly original but it does have some merit. It also has a rather large flaw as well.

What if I decide to avoid “Doing Something” in 2016? What if I just choose to stay in my little rut, play it safe and bumble through yet another year just doing the same old thing? That would be making a mistake while Doing Nothing wouldn’t it? So if I make mistakes when I launch out and try to do something new, perhaps daring, in my life; and if doing nothing or the same old thing is a mistake too, what am I to conclude? I conclude that no one needs anyone to tell them they ought to be making mistakes. Trust me you’ll make plenty of them. You’re going to make mistakes, I’m going to make mistakes, all God’s children are gonna make mistakes! That’s one thing I guarantee you will happen to and around you in 2016.

Okay so Mr. Gaiman’s thought might be lacking a bit in the logical category. But that doesn’t mean that what he’s trying to get at isn’t important because I believe it is. It’s just silly to imply that the only way to make mistakes is by trying something new.

In fact, I believe that very worst mistake most of us make is just staying the course and not taking risks. Mistakes in and of themselves aren’t good or bad, they are just part of being an imperfect human being.

What makes a mistake good is when it’s in the service of an attempt to do good, when it does no real harm to anyone and most important of all, when I learn from it. That’s the real power of making mistakes. Learning from them, improving what I’m doing and who I am, then moving forward in a wiser fashion.

Of course if you do that you’ll be cutting against the cultural tide around you. From the “If it ain’t broke don’t fix it” view of many traditional people to the “safe” culture of “safe spaces” from any and all offensive words, acts and “micro aggressions” (whatever the heck that is!), it’s all around you. The fact that Americans living today are the safest people from all forms of harm (medical, work accidents, war, etc.) in the history of the human species doesn’t seem to change that either.

So if you choose to take risks you’ll always get a lot of push back from the very people who told you to do it in the first place. Perhaps that’s a mistake on their part?

Here’s what it comes down to: In this new year, like every year, I don’t have any choice about whether or not I’ll make mistakes. But I do have a choice of what kind of mistakes I’ll make. I encourage you to make your mistakes in the service of ideas that are true and noble and uplifting as opposed to things that are just selfish and safe.

Getting a new backbone might be a great place to start the new year, as the wonderful G.K. Chesterton said. If you don’t know who he is, please do yourself a favor and Google him. He was quite the character and reading a few of his books wouldn’t hurt you either.

If I’m not mistaken following both Mr. Gaiman’s and Mr. Chesterton’s advice will indeed make it a much more meaningful, and probably more exciting, new year.