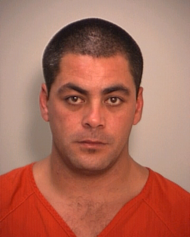 Machete-weilding Pulu allegedly attacks numerous victims at Sandbar, is chased into Big River and flees into desert on foot

On Monday, September 6th at approximately 1:50 AM, Sheriff’s Deputies responded to a reported stabbing at The Sandbar, located at 31404 Riverside Drive. Upon arrival Deputies found numerous victims that had been assaulted and cut with a large knife. Medical units had also responded and assisted Deputies with the injured; several victims had also driven to a local hospital for treatment of their injuries.

The suspect in these assaults has been identified as 39 year old Raymond Lee Pulu of Parker. Pulu is described as a white male, 5’11”, 200 lbs, with short black hair and brown eyes.

Arrest warrants have been issued for Pulu for Attempted 1st Degree Murder and Aggravated Assault x 3.

If you have any information about the incident or Raymond Lee Pulu, the La Paz County Sheriff’s Office requests you call 911 or Sheriff’s Detectives at 928-669-6141. Do not attempt to contact this suspect, he is considered dangerous.