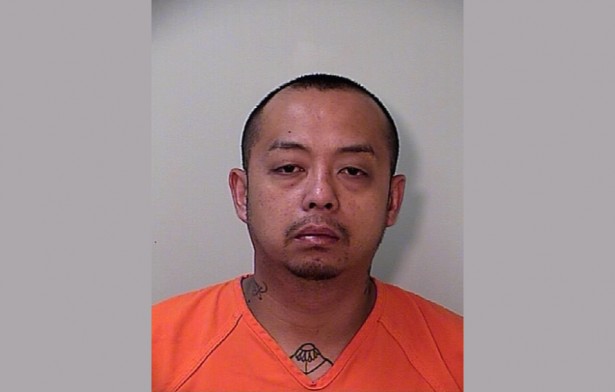 The La Paz County Narcotics Task Force was led on a high speed pursuit by an alleged drug dealer. On Monday afternoon at around 4:30pm, the Task Force attempted to arrest Phetpraseuth Soukthavone, aka “Chino”, near Poston, AZ.

The Task Force, which is comprised of the La Paz County Sheriff’s Office, U.S. Border Patrol, C.R.I.T. Police Department and the Riverside Sheriff’s Office, attempted to arrest Chino for 4 counts of “sales of dangerous drugs” (methamphetamine).

During the traffic stop, Soukthavone waited for Law Enforcement to exit their vehicles at which time he accelerated away in an attempt to avoid arrest. The pursuit crossed back and forth throughout the Parker Valley for approximately 45 minutes, or 10 miles. The pursuit ended in an area off the banks of the Colorado River where Chino was found hiding waist deep in the mud and cattails.

Over the past year, the Task Force had been investigating Chino for sales of methamphetamine and trafficking in stolen property. He is currently in custody at the La Paz County Detention Facility on $150,000 bond.

The La Paz County Sheriff’s Office reminded citizens in an accompanying press release that the Task Force is investigating narcotics or suspicious activity, and they can be reached by phone: “If you have any information, you can call the Task Force at (928) 669-9645 or you can report information anonymously on line at lapazsheriff.org.”