Remember the boat that sank at the weekend? Owner says it’s been stolen

Boat sinks on viral video; a few hours later it’s been stolen, according to man who reached out to Parker Live. And it wasn’t insured

A boat that drew over 200,000 views when a Facebook video showed it sinking on the Parker Strip has been stolen, according to its owner.

The blue and white Tige wakeboard boat went underwater on Friday evening when a large wave came across its bow, swamping the boat and capsizing it near Roadrunner bar north of Parker. The owner, a South Bay man called Nathan, says about 15 people helped roll it back over.

“We bailed it out with buckets and the bilge pump,” he told Parker Live. “I was going to drain the fluids and fill it with diesel overnight, and drain and refill. It should have been fine, maybe need a starter and alternator at most since it went under not running and was under for less than five minutes.”

Nathan says he and his group pulled the boat to the beach at Roadrunner, and left it there Friday night. “It was last seen by a patron at 3am Sunday,” he said. “Another patron said it was gone when he woke up around 6-7am.”

The boat’s trailer, which was in the parking lot at Roadrunner, had its lock cut and was also gone, Nathan said. 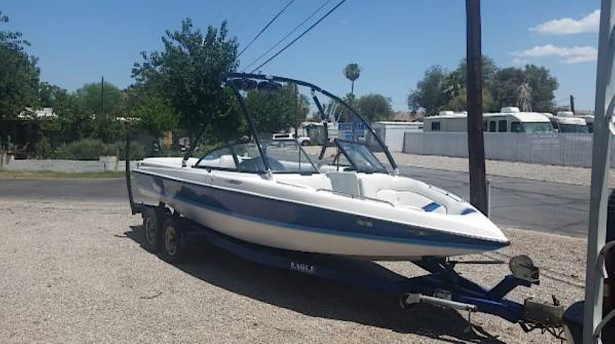 According to his posting on Craigslist Inland Empire, Nathan is offering $1000 reward for information leading to the recovery of the boat, “no questions asked.” He described the incident as a “devastating financial blow” and said the boat was uninsured. “Please insure your boats, do not make the same mistake I did,” he added.

Nathan makes the return trip from the Redondo Beach / Torrance area about every other weekend. The boat is a 1998 Tige Pre-2200i WT, blue with a white hull, white interior with 2 different blue swirls, black tower “if still on the boat” with kicker enclosures and polk audio speakers. The trailer is a blue Eagle trailer with no fenders and left rear of trailer frame damaged.

Parker Live could not verify any of the above details, and was approached directly by the man who was looking for help to spread the word.