Unofficial results for consolidated elections today in the towns of Parker and Quartzsite are in.

In the Town of Parker Council election, Dan Beaver received 234 votes, Steve Madoneczky 166 votes, John Yackley 148 votes and Candy Escorza 101 votes. Three seats are open in the election. The number of votes required to seat a council member is currently 142, but after provisional ballots are counted, that number will likely be closer to 150.

This means that Dan Beaver and Steve Madoneczky have been elected to the Council, and that John Yackley is currently too close to call. If Yackley fails to receive the number of votes required, then a run-off election will decide the third seat between Yackley and Candy Escorza in May 2011. Final results including provisionals may be in as early as tomorrow evening. 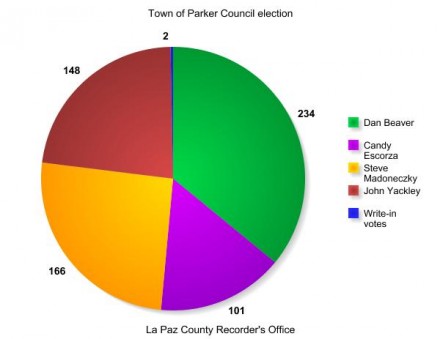 In the Town of Quartzsite Recall election, each of the five recalls failed to collect enough votes. Patricia Anderson received 53.04 percent of the vote against her challenger, Barbara Cowell 56.15 percent, Jose Lizarraga 63.69 percent, Jerry Lukkasson 60.64 percent and Joe Winslow 53.22 percent.